Having lived up in this area for a bunch of years, I would have guessed that 4th Crossing was a place where the pioneers crossed something on their fourth trip out here. Nope, got it all wrong.


4th Crossing was formally known as Foreman’s after its founder David Foreman. It is located on San Antonio Creek (even though the plaque says Calaveras River) is at the fourth river crossing on the Stockton-Murphy’s road. You probably don't know Murphy's, but it is the home of the Kautz (Like me) Ironstone Winery. And before you ask the question that everybody asks, nope, no relation.  Foreman had established a ferry to cross the river, which they replaced with a toll bridge. The bridge is still standing to the west of the bridge that Hwy. 49 runs on.


The town was famous in the 1850s for its rich placer ores (deposits of of gold in sand and gravel in modern or ancient stream beds), which were replaced by lode (hardrock mines) mining. After the gold ran out, the town continued to operate as an important stagecoach and freighting depot, serving the southern mines until after the turn of the 20th century. The county's first Justice Court was established here, complete with a Justice of the Peace. 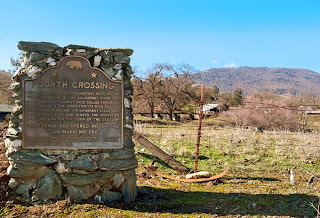 I pulled this picture off the Internet. In real life it doesn't look nearly as nice. Seems to lost in the "Keep the landmarks clean" department.