I Should Know Better

Thursday is my day for chores around the house. Laundry, put the garbage out, etc. So what do I do? I go fishing. Once I get home, it's a scramble to get everything done. Sometimes I'm just not very smart.

I headed out to Lake Camanche. As I checked in the girl said the DFW stock truck just left and stocked at the launch ramp.

Yes, I could have driven over there, parked, and walked that 300 yards downhill to the bottom of the ramp and then walked back up the 300 yards to the truck OR I could drive out to the Day Use area and park within 10 feet of where I would fish. You guess which way I went.

When I got to where I wanted to fish, I couldn't believe how low the water was. I took some pictures, so let me explain what you're seeing.

In all the years I've been fishing this lake, I've never seen this island.

In the picture below, I walked over to the other side because I was curious about that orange thing right in the center on the edge of the water.

On the way over, I did have two rods in the water, one with rainbow and the other with pink Power Bait, I came across the following:

After that little trip and while I was sitting, soaking Power Bait, This group of mud ducks (I don't know what kind they are, I just call them mud ducks) came by. I counted 32 of them. Looked like we had us a convoy. 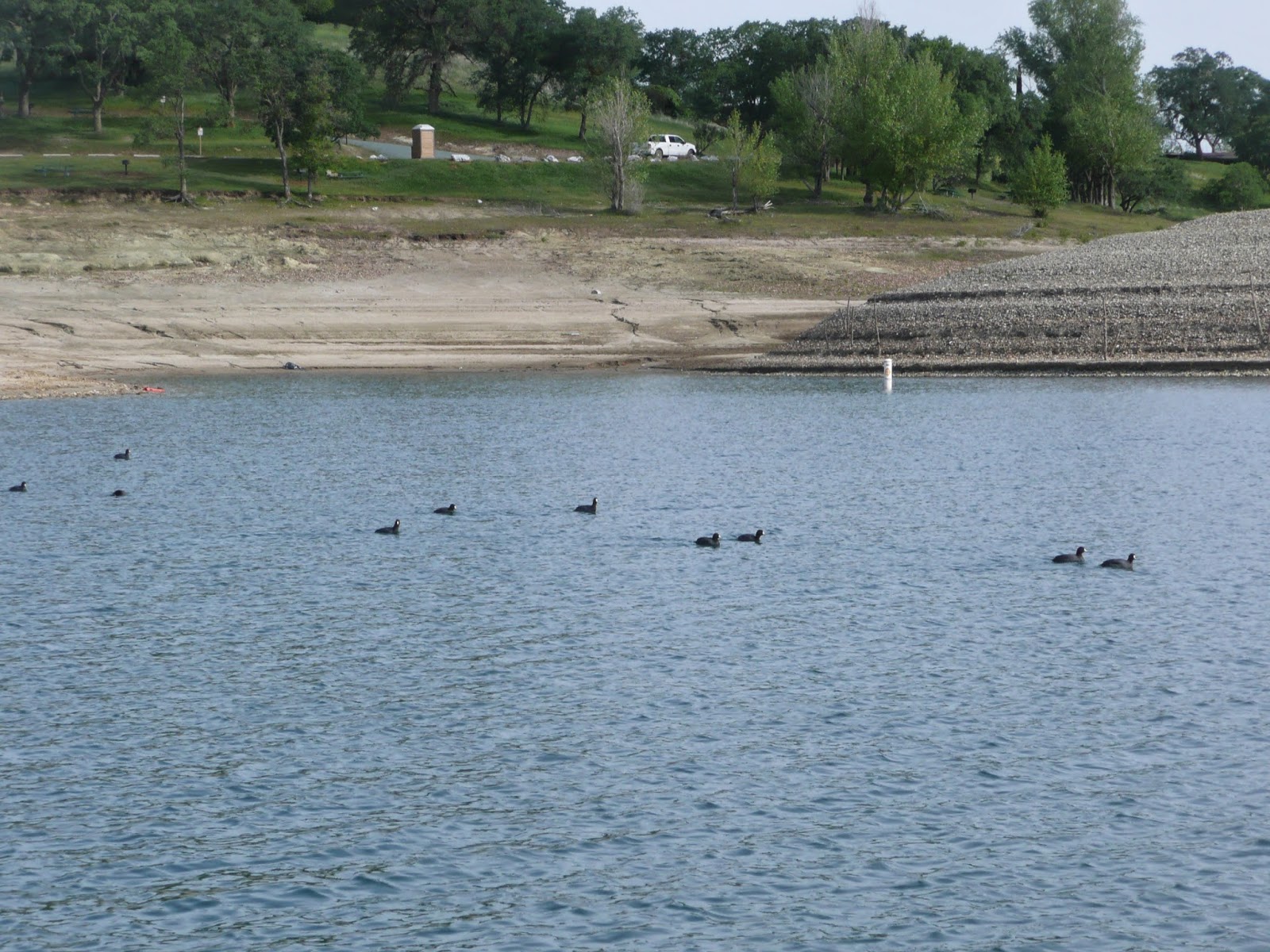 I hung out with the mud ducks for an hour and a half or so and then moved down to the place by the two buoys where I usually fish.

With two rods out I think (and I use that word loosely) I got three hits. The line went straight (sign of a hit), the rod bounced (another sign of a hit), and then nothing. This happened all three times. Probably a fish hitting the line as it swam by and ignored my offering. The let down is hard on an old geezer. Get him all worked up and then dash his hopes.

Around 10:30 the wind started to blow. First a nice breeze, then a harder breeze, then a good wind, and finally enough to produce whitecaps on the lake. At that point I had my hoodie on with the hood up and the string in the hood pulled as tight as I could to keep these old ears warm.

At Noon I'd had enough wind and finally called it a day. On the way home I stopped by America's Tire Store and got my tires rotated. We're starting the summer camping trips here shortly and that was one of the items on my list of things to do.