How About A Little Trip Back In Time ?

For all you Geezers out there and those younger "kids" that appreciate beauty in it's finest form.

I give you the 1963 Corvette Fastback 427cubic inch, 5 speed, it originally came with a 4 speed but was replaced with a 5 speed during the restoration process. 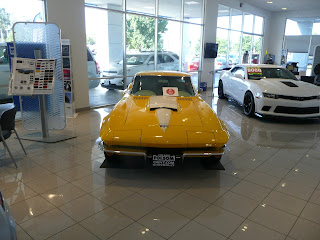 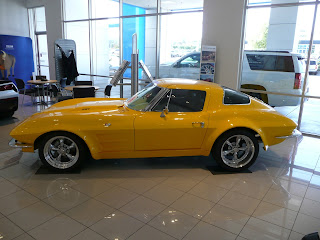 Those of you that have lived through this era know this is one HOT car. At the young age of 18, I was given the opportunity of driving a 1964 Corvette 427, 4 speed to the repair shop to get an estimate on a small ding (a hole the size of a half dollar) in the back, above the bumper. The car belonged to the Vice President of the company I worked for and he didn't have the time to take it over.

Here is the truth, I was scared to death to give it any gas because it was so powerful that I idled over to the Chevy Dealer and back. And that little ding, $500.00 (a lot of money in 1964) was the estimate.

The one above? Rumor has it that the owner (owner of the Chevy Dealership) was offered $200,000 for the Vette. He just said it's not for sale.

I promise, I did not slobber on it one drop. They all landed on the floor.

Email ThisBlogThis!Share to TwitterShare to FacebookShare to Pinterest
Labels: Corvette