Just got back from what is becoming our yearly (Last Year) trek to Hendy Woods State Park up in the Redwoods of Northern California. We left Friday at 10:00 am for the 4 hour trip. Six hours later we made it to the park. Took us 6 hours to get back home too. Google Maps does not account for the nightmare that is Highway 37 across the North Bay or for road construction (remember California has two seasons. Winter and road repair).

Since I took a bunch of photos last year I only took three this year.

We decided that we need another day up there since one full day is taken up wine tasting at the Anderson Valley wineries. So next year will be three nights then maybe we can go on a couple more of the trails that run through the Redwoods.

Stay tuned, the Float Tube Cumberland is about ready for it's rebirth. Classic Accessories finally got their act together and after two failed attempts to get me the bladders, they came while we were gone. I might wait until next week since it is supposed to be 100+ all week, Wednesday being the peak at (weather guessers remember) 107. Stay cool.
Posted by Mark Kautz at 12:40 PM 6 comments:

A Few More Pictures From Yesterday


This snake was at the North Fork of the Stanislaus River. Good thing Yuki took the picture, I'd have thrown rocks at it. I hate snakes.

A Couple Of New Places

I emailed Yuki last week that the only day I could fish this week was today. He suggested we head up Highway 4 to Kinney Reservoir on the other side of Ebbetts Pass. I'd never been any further than White Pines Lake so I said "Let's go".

I met him at the Wells Fargo Bank parking lot in San Andreas (yes, like the fault line), threw his gear in the truck and off we went. A short stop at Starbucks in Angels Camp for coffee and up the hill we went (all 63 miles).

I'm not sure what time we got to Kinney Reservoir, probably somewhere around 9:30 - 10:00. We parked at the dam and each put out one rod with Power Bait and since we could see the fish swimming in front of us, used the other rod with Kastmasters and Panther Martin's.

Here are some photo's.


We hung out for a couple hours, but since the fish didn't seem to want anything we offered, decided to head back down the hill to Lake Alpine. Steve, the UPS driver when I lived up in Volcano kept telling me I should go fish Lake Alpine, so we did.

We wandered around a couple of areas and finally settled in the Day Use (sound familiar) Area. Once we passed by all the people lounging at the lakes edge, we found a somewhat free of swimmers, area. Yuki put out one rod with a crawler and the other with the now infamous "brown" Power Egg.

I, on the other hand, am still in the rainbow Power Bait rut and both of my rods went out that way. Shortly after settling in, Yuki needed something from the truck so off he went and no sooner did he leave and I got the first fish of the day.

Nope, Yuki wouldn't believe me. I even showed him the picture, but he claimed it was a fish I caught last week. Nothing I could do to convince him, so I had to catch another, which I did shortly thereafter. This one we put on the stringer since Yuki's freezer was getting a bit "fish" bare.

The third and final fish of the day came within the next half hour or so. Once again the Yuki Hex took hold.

In between fish, I took some shots of Lake Alpine to share with you since none of us has been there before.

About then, the clouds started rolling in. We were expecting thunder storms this afternoon, remnants of the hurricane that is causing so much havoc in Southern California.

While Yuki was munching a sandwich, this little food thief showed up and of course, Yuki being the soft touch he is, started feeding the little beggar.


Then some more clouds started moving in and we decided that we wanted to try our luck on the North Fork of the Stanislaus River which was on the way back, anyway. Nice little creek. Would be a good fly fishing spot, but Yuki saw a guy fishing there with Salmon Eggs and pulled a couple fair sized ones out. So we tried Salmon Eggs and Meal Worms, but could only rustle up those little bitty bait stealers.

While we were working the creek, the dark clouds came and so did the thunder. Time to pack it up and call it a day.

We'll do this one again, another day.
Posted by Mark Kautz at 8:05 PM 4 comments:

Aah, Silver Lake at 60 degrees with sunshine and blue skies. Doesn't get much better than that. OK, maybe if 20 or so fish were caught it would be better.

Seems like it took forever to get up there. Probably had something to do with the gazillion gravel trucks that have been running up and down the mountain for the last couple weeks, that I know of. A good portion of the drive was at 20 to 35 mph and when you could finally pass one, you just ran into another one.

But I finally got to Silver Lake around 10:00. Checked in, paid my $5.00 parking and drove over to Ferguson Point for a change of scenery. Ferguson Point was the first place I fished Silver Lake several years ago when my wife and I went up there for a picnic. Yes, we went for a picnic and I took my fishing rod and WORMS.

I parked at just about the same place and put out two rids with rainbow Power Bait. Then I remembered I'd forgot my license (which also has my hemostat and clippers) so I walked back to the truck, got them, and walked back down to the lake.

In that short period of time, one of those little 8" stockers decided it wanted my PB. Brought him close to shore, snapped a couple shots, and let him go for another day.

While I was sitting and waiting for the next fish (which never came) I snapped a few shots for your enjoyment.


So, with nothing biting, my mind wandered to Upper Blue Lake last week and the brown Power Egg.

Then I had an epiphany. I'm not a religious sort of person so don't take an epiphany as some sort of religious experience. I had a bag full of Mice Tails and thought there must be one that has a brown egg.

All I had to do was snip off the red Power Worm part and Voila, brown Power Egg. Now you ask, did it work? Of course not. Apparently it only works in Upper Blue Lake and where ever it was Yuki saw it work. I did slather it with Pro-Cure Garlic scent.

Since I wasn't getting any bites at Ferguson Point, I decided to wander over to the dam. Rumor had it that the DFW planted yesterday.

Took a few more shots for your pleasure.


The next two shots are of our resident Bald Eagle. You might have to make the picture large to see him sitting on the left about half way down.

On the way home I thought I'd stop at Munnerlyn's for an ice cream. They had Raspberry Truffle, my favorite. Raspberry ice cream with chocolate chunks with Raspberry liqueur inside. Talk about decadent.....

Here is what the outside of Munnerlyn's looks like. It's in beautiful Pine Grove population, somewhere around 2220 and an elevation of just under 2500 feet. Note all the solar panels, very green.

Oh, forgot to tell you, I did catch another one of those 8" stockers at the dam and this time I gave it to John to add to the one that he caught. He was bringing the two to his neighbor.

Wow, That Was Fun

Sorry, but there are no pictures to go with this post so if you want to bail, do it now.

On the other hand, if you bail you'll be missing a good story about catching fish.

Yuki got to the house at 8:00 and with his gear packed in my truck we headed up the hill. We had a couple options. We could go to Caples Lake or Upper Blue Lake or any place in between.

He left it up to me and you know, if I had a choice it would be Upper Blue Lake and so it was.

Now our local weather guessers said it wouldn't be raining or thundering or throwing lightening bolts out of the sky. OK, they got one out of three right.

We got to Upper Blue Lake at 10:00 and sure enough it was sprinkling. But after two hours of driving, we were going to fish Upper Blue come hell or high water. We set up at the usual spot and each put out one rod, mine with rainbow Power Bait and his with, get this, a garlic flavored brown Power Egg. Never saw that one before.

By then it was raining harder. Along with the rain came the thunder, but no lightening. See, one out of three. We decided to head back over the hill in hopes of driving out of the rain.

When we got back into Hope Valley, the rain had stopped so we decided to drive over to the West Fork of the Carson and fish a couple spots on the river. Neither place produced any fish.

Then we drove back over Carson pass and stopped at Caples Lake by the spillway. An hour of no bites and we called it a day. As I was reeling my last rod it felt like I had "something" on, but it wasn't a fish. I took a wild guess that it might be a crawdad just as it became airborne and hit me square in the chest making sure it tangled the line around my fishing license, my hemostats, and my clippers.

There I stood with a crawdad hanging from my chest, claws ready to pinch anything within pinching distance. I held it out, clipped it off, and dropped it (gently) back into the lake.

Then Yuki and I went for an ice cream at Munnerlyn's. As I said back on June 25th, here is a little more on Munnerlyn's. It's all home made. More later.


Ok I lied when I said there weren't any pictures. Yours truly.

Here we are on the verge of the Nation's Birthday.

I had a discussion with Howard over at Windknots & Tangled Lines about people drowning in local rivers (his and mine). It went something like this: Warm weather, cold rivers, and Boneheads = drowned Boneheads.

With that said, I'll leave you with a "Happy 4th" and a little saying from Confucius:

Sunset And A Cat Nose

Thought I'd share a beautiful sunset from last night. You can imagine how humid it was with the temperature at 104 (106 in Sacramento). 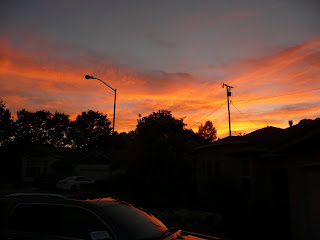 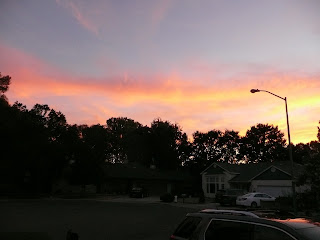 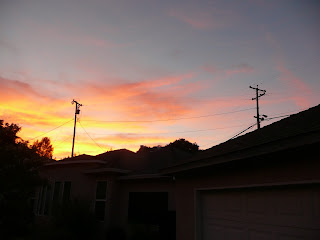 As I was getting the camera ready, Nosy Parker wanted to know what I was doing.