The wife and I watch International House Hunters on a regular basis. Yesterday we watched an episode where a couple was moving to Sri Lanka. They did the usual house search and showed some of the scenery around the area. Then they hit on a bunch of guys sitting on a pole, fishing in the surf and I was blown away. They called it Stilt Fishing.

Here are some pictures I copied off the Internet. I just wanted to share this with you because I'd never seen anything like it before. 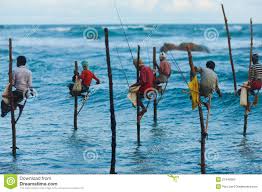 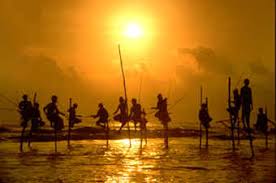 Apparently a custom that dates back to WWII. Here's a little  excerpt from Wired.com.

The practice started during World War II when food shortages and overcrowded fishing spots prompted some clever men to try fishing on the water. At first they used the wreckage of capsized ships and downed aircraft, then began erecting their stilts in coral reefs. Two generations of fishermen have eked out this physically demanding existence at dawn and dusk along a 30-kilometer stretch of southern shore between the towns of Unawatuna and Weligama.

Apparently there are some actors out there for the tourist photo shoots too.

Any way, I thought it interesting and wanted to share.

Have a great weekend.
Posted by Mark Kautz at 11:02 AM