I Wanted To fish Where Oprah Fished, Yosemite Part 1

If any of you watched that episode (actually 2 episodes) of Oprah where she and her BFF Gayle went camping at Yosemite, then you watched her fly fishing in the Merced River. If not, go out on the net and you can find about 5 seconds of them standing in the river.

We headed out of the house Friday morning about 11:15 and rambled down Highway 49 toward the park. Google said an hour and a half at about 65 miles. You have to go on Highway 49, then Highway 108, then Highway 120, oh never mind.

We stopped at the vista point over looking New Melones Reservoir for lunch. I took a couple shots just to record the pathetic level of the water, STILL. Since we're about done with rain this season, what you see is what you get.


Got Yosemite Pines RV park and set up the Clipper. Only complaint I had is that the spaces are too close together.

This little gazebo in the center was the focal point of Saturday Night. Music from all era's, dancing (not us), and generally making a ruckus.

The white flowers were in the drainage ditch behind the trailer. Not sure what kind, but they look like some kind of Lupin. Just thought they were cool. 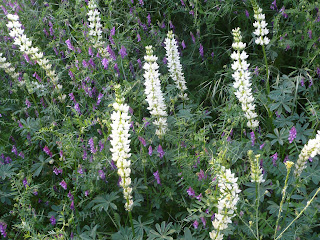 Saturday morning we got up, ate breakfast (French Toast and sausage) then hit the road for the park.

When we hit this traffic jam we were still about two miles from the park entrance. Took us almost and hour and a half to go those last two miles.

Once we got inside the park we headed toward Yosemite Valley. By the way, the cost for a car to enter the park is $30.00. Fortunately I have the "Geezer" pass and we zipped right through the gate. Actually we did have to stop and show the pass to the Ranger in the booth. We got in free though.

A lot of places to stop and take pictures. Did I mention that it was insanely crowded? Every, and I mean every pull-off was packed. We shot photo's as we drove by. It was crazy.

This is the first encounter with the Merced River, I think. In any event, no fishing here, besides where would you park? 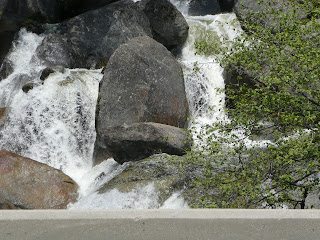 You can see in the picture below just how fast the water was moving.

I have a lot more photo's as requested by Mike (Troutrageous!) so tune back in tomorrow for "I Wanted To fish Where Oprah Fished, Yosemite Part 2".