I Wanted To fish Where Oprah Fished, Yosemite Part 3

I was going to do this in 4 parts, but Yuki & I are heading out to the Trout Pond tomorrow for probably the last trout fishing there until Fall.

Here is a couple more of those huge granite outcroppings that are everywhere in Yosemite. 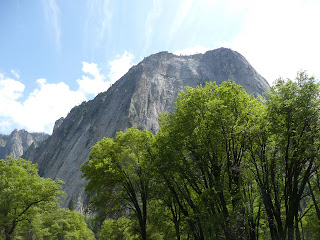 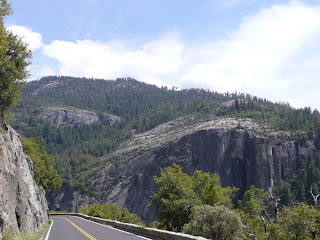 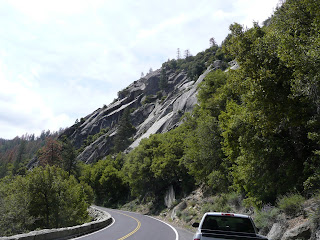 I didn't go to the usual places like Half Dome, Glacier Point, or Bridal Veil Falls because we'd had enough traffic for one day. Besides, if you haven't seen a commercial, a picture, or something on the web just go out and do a search. They usually show all those.

I forgot to mention the idiots that are in the park. We came upon one of those parking places where there are a million cars parked and people are walking across the street in droves. In fact, there were two young ladies crossing the road and were so oblivious to what was going on that I beeped the horn at them not once, but three times and when they finally realized that there were cars on the road, looked at us as if it was our fault we were on the road. Idiots.

Mike (Troutrageous!) The previous pictures were for you. I hope you enjoyed.

Now, it's Sunday and I still wanted to do something else as long as we were in the area anyway so I asked the young lady at check-in about places we could go. She suggested Columbia State Park (we were just there), Jamestown Rail Museum (we were just there), Moccasin Creek fish hatchery (I asked if I could fish there? She said no). OK we'll pass on that one. Then she suggested Rainbow Pool and Rainbow Falls at the green bridge.  Can you fish there? She said they stock once in a while.

Dave (Bay Area Backwaters) you might know this place. It's on the South Fork of the Tuolumne River. We passed over this place on the way to the park on Saturday and it peaked my attention on just a drive by. Away we went.

When we got to the parking lot, there were several people walking around with fly rods and spinning rods in hand going here and there. I asked if anyone caught any fish and was told that one guy had caught three.

We walked down to the river and it looked very fishy. The first picture is actually the pool above the Falls, but very easy access for a Geezer. They provided cement steps and everything. We went back to the truck and got my gear. I chose to bring "3" along instead of a big river rod hoping that the Merced would not be as blown out as it was. Also I've never caught a trout on "3" that I can remember, but if I've forgotten, let me know. I'm old after all and have those "Senior Moments". They seem to be coming more often as the days go by.


Once geared up, I put on the old faithful Sloan's Paralyzer and tried for a little top water action. It didn't even get any interest.


Since I couldn't get any top water action, I switched to the nymph below.

No indicator, just the nymph. It only took three casts and there it was. The 12" (a guess) Rainbow that broke the 9 trip skunk and the first fish (if I remember correctly) on "3". Nice fight too.

Made me feel better taking two pictures of the same fish. Made it seem like two fish. It's been so long..........
As you can see in the photo below, there is a lot of water coming into the pool. Lady at the resort said it's a swimming hole in the summer as is the pool below.
.
I didn't mention, but the road to the pool is one way in and one way out. As we climbed out we took a picture of pool from a distance.

On the way back, there is a vista point where you can photo this huge canyon. This is not Yosemite, but scenery on the way to or the way back from the park.

Well, that's it. Hope you enjoyed the trip. Our next adventure is at Collins Lake East of Marysville which is North of Sacramento. We are staying 2 nights and have a spot right on the lake (supposed to be). Juan Lopez from Breaking the Bank blog said he might pop in. He likes to fish Collins.

Mean while a little fishing locally and a lot of painting in the house along with mucho weed pulling. I made the mistake of letting the California Poppies go wild and they are literally all over the hill behind the house.

See you tomorrow for the Trout Pond report.
Posted by Mark Kautz at 8:30 AM