A New Place To Camp And Fish

Many years ago I was a "remote" father. My children lived in the mountains outside Marysville, California and I would drive up every other week to pick them up for my weekend visitation.

The road that leads to where they lived went by Collins Lake and although I passed by there twice a month for about twelve years, I'd never stopped to see what the lake was all about.

In searching for places to camp last Summer we made reservations for a weekend to give it a try. We were scheduled to go in April, but the move to the new house just put a kink in the plans. So this year we rescheduled for this past weekend.

Those that I talked to said it was an incredible Power Bait lake and should be right down my alley.

The space we had was described as a lake front spot with water and electricity.

I guess you could call it lake front, but the distance between the "pad" and the lake was about 15 feet straight down. And as you all know I don't do straight down very well, but I did find a pretty good sloping path that I could navigate with little or no effort.


I took along my rod holders, but the shore was gravel and rocks and the holders would not go into the ground so I ended up leaning my rods on my tackle box as I often do.

While I was firmly planted on a rock (with a chair pad under my rear end), I took a couple shots around the lake. The area over there was the swimming/boat launch/boat rental/kayak rental/hot dog stand area.

So I soaked rainbow Power Bait on two foot and six foot leaders, but to no avail. I suspect earlier in the year would have been better.

Saturday morning arrived and I fished a little more with Kastmasters. In the early afternoon we went up to the store and got a couple ice cream cones. OK get this, for $2.50 you get a  waffle cone with four (4) huge scoops of your choice of ice cream. There were about a dozen flavors.

The surface water temperature of the lake (I found out a bit later) was 74 degrees. You and I both know there aren't going to be any trout around in that temperature. So I changed tactics. I put on a silver/yellow Panther Martin and started walking the shore. I know that both pan fish and Bass with hit a Panther Martin. I walked one way with the silver and fished the gold/black on the way back.

Did I mention the idiot in the red/white boat?

This guy drove back and forth, at top speed towing one of those rubber rafts, about 150 feet off shore ALL AFTERNOON. I'm sure that if there were any fish in a hundred mile radius, the were shaking in their scales.
Our neighbors (the guys anyways) were sort of die hards. They fished the whole weekend and got nary a hit. They were fishing crawlers the whole time.

Going back to the trip to the store, I did pick up a box of red worms. Figured I'd fish for pan fish if nothing else. Late Friday night a gentleman and his three (I assume they were his) kids were fishing down below us and one of the girls landed something that looked like those big Blue Gills Bill Trussell catches during his 50 quest. Thought I'd give it a shot, worm under a bobber.

I fished for several hours in several places, but the only fish I saw was the one that girl caught.

Once again skunked (at a good Power Bait lake even), as we were pulling out this morning, we stopped at the store again, got a cup of ice cream and sat on the deck behind the store. Of course they had all the pictures of all the mongo trout caught in the lake, but at this time of year I feel that the only ones catching trout are those deep lining from a boat. It seemed that all the "fishing" boats were heading for the dam area, hell bent for leather as they sped by us.

We found a space we liked better and inquired about reserving it for next year, but only if you rent it for a week at a time. Don't think I want to spend a week there. It's a nice place and we liked it, but not a weeks worth of like.

That's it for the June camping trip.

Yuki sent this picture of a trout he caught at Spicer Meadow Reservoir on his fly rod with a fly. 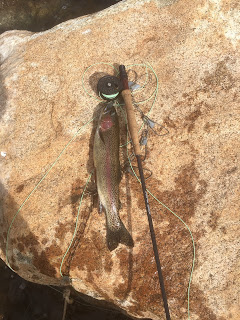 Another fly fishing monster has been created.
Posted by Mark Kautz at 7:03 PM