The day started out with plans to fish a small (one of those blue lines on the map) creek called Bloods Creek. Yuki sent me an article by some guy about how good the Brookie fishing was in this creek which is just below Bear Valley Ski Area off Highway 4.

After some back and forth on Highway 4 at the Bear Valley Ski Area, we found Bloods Creek. Sorry to say, it seems Bloods Creek bled to death already. I don't think there was enough water to support any fish let alone good Brookie fishing.

So we went to plan B. We stopped at the North fork of the Stanislaus River and within fifteen minutes were eaten alive by mosquito's. One now has to worry, not only about mosquito bites, but West Nile Virus, and Zika Virus so we canned that gig and headed for Plan C.

We went to check out Hobart Creek that flows into Spicer Meadows Reservoir (mentioned in the last post). Yuki was concerned about where he was fishing last time because Hobart Creek doesn't open until July 1st. He showed me the rock he was standing on and he was in the lake, not the creek.

Since we were already there and Yuki had good luck last time, we decided to throw a couple flies. Note to self: Take 9' fly rod as well as "3". Really hard throwing a fly in gale force winds with a 5'9" 3 wt. fly rod.

I decided to take some photos of a pretty awesome lake while Yuki continued to fight the wind.

Yuki gave up and we decided to go over to the dam area. Dam areas are usually good at most high country lakes.


I put out one rod with rainbow Power Bait and Yuki put one out with a crawler. His other rod was set up with a Thomas Buoyant Lake Lure in silver. On my other rod I started with the pink Kastmaster.

Didn't get any interest in pink, so I switched to silver. My butt was firmly planted in the red Coleman camping chair when the hit on the silver Kastmaster came. Struggling to extract myself out of the chair, I let some slack get into the line and the fish (which felt pretty big) was gone. More casting of the silver Kastmaster produced nothing so I changed to gold.

A couple casts, and the fish was on. I was still firmly planted in the chair, but made sure no slack got into the line this time.

Once out, the fight continued.
OK, I was surprised myself. It's been a slack year so far.

I got it to the shore, took a picture, and sent him home for another day.

By the coloring and the big tail, I figured a hold over. Unfortunately that was the only fish of the day. There was a lot of top feeding and Yuki tried with his fly rod as I tried with a fly and a bobber, but wasted efforts. Note to self: remember the 9' fly rod next time.

These little clumps of pink flowers were everywhere. I forgot to take any pictures, but thanks to Yuki and his I-Phone you get to see them too. 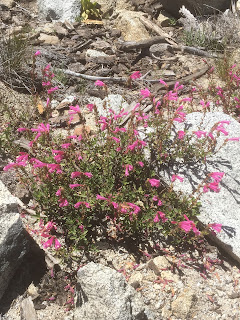 Back up at the truck after getting slightly fried (it was 100 at the house when I got home) probably 80's at 6621 feet I took a shot of the island. Just looked like a nice photo.

Well, that's it. Next time (once it stops being so damn hot) we're heading up to White Pines Lake (also off highway 4) to fish for some of those small bluegills that are all over that place. Probably late next week.