On the way to the park (Hendy Woods State Park) we had a blow out on the trailer. Keep in mind that the Clipper is a single axle trailer. It blew about 100 feet from the nearest turnout on a very windy road going about 35 mph. I can't imagine what would have happened at 55 mph. Thus the disintegration of the tire (I think). The tires are almost brand new (3 years old with only 12 trips on them) so with a lot of tread still on them, one would think they'd be OK. I think we ran over something that trashed the tire.

I might also note that in a bonehead moment I forgot to check the air in the spare so even though I changed the tire, we still had to call AAA to air up the tire and I had him check the lugs just in case. I haven't changed a tire since 1976. Best to be sure all was well.

We had reserved the same camp site as last year (you can see pictures here), but this year we had a "new and improved" fire pit. Problem was when they changed it, they just scattered the ashes around in a circle, some places being about 4 inches deep. I scraped away a path to the pit and filed a complaint at the check-in kiosk, but with assurance that maintenance would take care of the problem, NOTHING happened.

Ran up to Fort Bragg and secured a new spare tire and rim. Can't  take a chance on driving back without one. Then headed for lunch at Queenie's.

While we were driving up and down Highway 1, I managed a couple ocean shots. In the one below that big plume of white on the top right, is a wave hitting a rock. 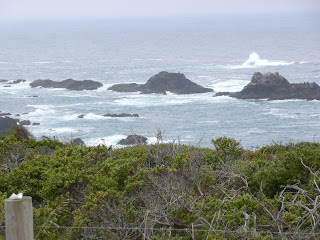 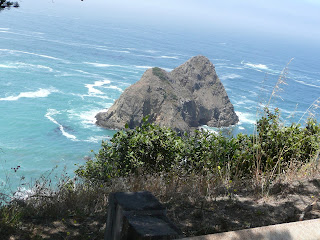 Our next door neighbor was a gentleman named Kyle (hope it's spelled right) and his daughter having a daddy/daughter weekend. In chatting, we mentioned lunching at Queenie's and also mentioned it was on Diners, Drive-ins, and Dives, Guy Fieri's show. You know the guy.

Kyle mentioned that he, in fact knew Guy and there you have three degrees of separation again. We met Kyle, Kyle knows Guy. Wait, there's more in an upcoming post.

Somewhere buried in the house I have a copy of the Kautz family crest. If you don't have yours, I would suggest getting it. You find out a bunch of cool stuff. On ours, it has chevrons and a bunch of other stuff, but the Screech Owl (You can hear it here) is the main focus of the Kautz Family Crest.

I've never seen one except this stuffed one in the information center at the park and since I forgot to take a picture last  year, made sure I got one this year.

Very busy this week so I don't know if fishing will fit in, but stay tuned.
Posted by Mark Kautz at 8:20 AM