Headed up the hill around 10:30 am. Thursday. Check-in at Hope Valley Campground was 2:00 pm, but you can usually get into your space early especially on a weekday.

As I've mentioned many times in the past, California has two seasons. Winter and road repair. Highway 88 (the road all the way to Hope Valley) is ripe with road repair. Three different places to be exact.

First one, and you know they are all one lane, flag person, wait for the truck that guides you up that one lane road to come to your side, wasn't too bad. Maybe a couple minutes tops. The second one though, was somewhere around a 20 minute wait. Third one was again not too bad, maybe 5 minutes.

OK, got to the camp spot, set up the trailer, and tried to decide what I was going to do next. As I mentioned in the last post, the wife had to work Thursday and Friday so I was on my own.

The West Fork of the Carson River runs right by the campground (I've told you this before) and as usual there was nothing that looked like a fish in that water. So I headed up Blue Lakes Road and stopped by the bridge. Let me explain. The West Fork runs right along the left side Blue Lakes Road for about 5 miles and then crosses under the road at the "bridge". From there it runs along the other side of the road for a couple miles and then disappears into a meadow, never to be seen again.

I parked at the bridge and set up "3" with a Sloan's Paralyzer. Thought maybe a little top action would be fun. The creek up there is full of little 6" Cutthroats. There was probably 25 or 30 under the bridge, but not the least bit interested in anything "fly". While I was trying to entice them I looked downstream and it looked like there was a bunch of leaves floating in the water. More on this in a minute.

Since I didn't get any interest, my instinct was to work my way upstream and see what I could find.

In the picture below, I got one good hit just below the big rock (center/bottom), but nothing else. 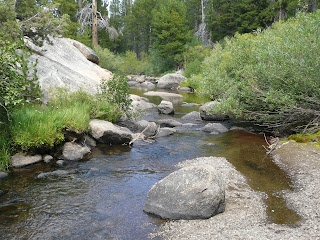 I worked my way back to the bridge and thought I'd try downstream from the bridge. When I crossed over the bride, what I thought was leaves wasn't.

Just look at the picture below. I don't know what or how. I can't say any more. 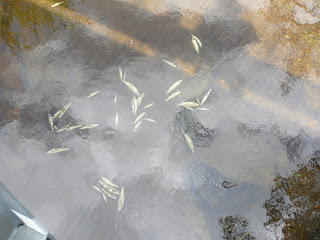 I got up Friday morning, fiddled around the camp and then drove home to pick up the wife.

She finally got off at 2:00 pm and we headed back up the hill. Did I mention that the road work goes both ways? Yup, wait here, wait there, wait in the other spot. Down hill and back uphill.

Finally got to camp around 4:00 and since the day was mostly done, sat around the fire and had dinner. I don't know about you guys, but when I'm camping, bed time is just about dark.

Got up Saturday and the plan was to take the inflate-a-yak up to Upper Blue Lake, paddle around and pull a Kastmaster behind. Please keep in mind, before you say "why didn't you take it out yourself" that the yak is something we do together. Wife was just too tired after a blistering week at the zoo (her nutso job), so she stayed at camp and I drove to Upper Blue to just do a little lure casting. Since the plan was to pull a Kastmaster behind the yak, I was woefully unprepared for shore fishing. All I had was one of my spinning rods and a small box of Kastmasters.

But, never fear, the Shoreman was on his game, which is someplace I haven't been lately. Several people fishing in my usual spot, so I just walked a little farther beyond and started throwing the 1/8th oz. pink Kastmaster. A couple guys sitting to my left commented when I hooked the first fish after about 5 casts. They further commented when I hooked the second one about 5 casts after that. Two to hand in about 10 casts.

The third one took a little longer. I suspect they figured the pink thing wasn't edible. After that, I changed to all the other colors and gave them about 12 casts each, but that seemed to it for the day.

If you make the picture below bigger, there is still a little snow on the hills on the other side.

Then I decided to give Lower Blue a shot just in case. Didn't seem to be anything interested in Kastmasters in that lake. Probably just not where I was.
So I headed back toward camp.

Still a little snow left on the Nipple. Yes, that is the name of that peak. Really, I kid you not.

So no inflate-a-yak this trip. Next chance is Upper Lake the last week of September. I'm taking my float tube too.