OK, no comments on part 1. Must not have been very interesting even with that little cliffhanger at the end.

So here is part 2. I'm sure you'll find something interesting.

I continued down the "cement ponds" and took another photo of planters.

At the far end, this is actually the beginning if you come in that way, The sign below is where and what they stock. 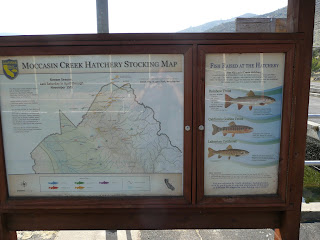 You've got to remember that the hatchery at Nimbus Dam has had numerous problems in the last three years so to see this many fish ready to stock makes one feel good.

Then at the very end I found this little pool. Look closely, there are some mongo Rainbows and Browns. Some I would guess upwards of 23"-24". Makes one want to fish right there, but they don't see the humor of fishing in the hatchery.

I noticed one of the rangers taking some pictures over by a gate near the egg hatchery building. Nosy me, I walked over and found one of the places they stock, when they stock.

The first thing I noticed was a LOT of fishing line hanging from the surrounding trees. Some of the trees even had bobbers like the one below.

The pipe in the next picture is an inlet of sorts, but the greatest amount of water running into this creek (by the way this is Moccasin Creek) is coming from what looks like a drain from the hatchery. 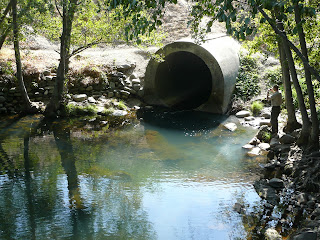 The water runs down the creek and eventually into Don Pedro Reservoir which is just downstream.

So, back to the first picture where I said I scared the hell out of that ranger. As I was walking back from the creek, the door to the egg hatching room was open and I walked in. He was standing with his back to me and when I said Hi, that was the time.

The first tank had these fish. Anyone want to take a guess what they are? Tell you later.

I'm only guessing because there are many High Sierra lakes that have absolutely no access by anything other than air (or maybe horseback) that have fish in them. Some are Rainbows and some are the beautiful Golden Trout.

In the picture below are Golden Trout Fry. One would assume that these are destine for High Sierra Lakes.


Here are a couple bullet points.

And finally, you guess what the fish are? They are Albino Rainbow Trout. Nope, didn't know such a thing existed either.

Hope this peaked your interest.
Posted by Mark Kautz at 9:22 AM