The Maiden Voyage Of The Freedom Express

Hit the road at 10:00 am with Blue Lake Upper (not to be confused with Upper Blue Lake) as our target. Arrived mid afternoon and set up in our favorite spot.

It was kind of late by the time we got the trailer up and running so all I could do was soak some Power Bait off the dock in the picture below.

As the day progressed, I took a couple more shots around the lake for your enjoyment. 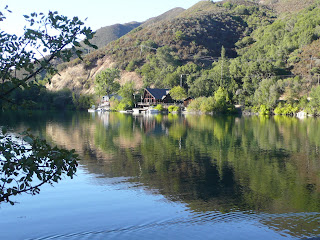 The final picture of the day is sunset or just a little beyond.

Tuesday morning found me in the Float Tube Cumberland with fly rod in hand and a Tungsten Bead Head Thin Mint on the end. When I launched, the water was pretty warm for trout, but I had high hopes.

Second cast and this Bass thought the Thin Mint was a tasty morsel. Got him to the float tube and as I lifted him out of the water, he dropped into the stripping apron or there wouldn't be any picture of the ONLY fish I caught all trip. Note to self: Next year take those Bass flies you bought.

By then, the wife was in the Inflate-a-Yak and floundering around just off shore. OK, give her a break, the only other time we used it was at Upper Blue Lake (not to be confused with Blue Lake Upper) over a year ago. I had her follow me around so I could keep her in range while she figured out the logistics of kayaking. I have to admit, didn't take her long and she was bipping around that lake like she owned it.

Since she was doing so well, I took time to take some more shots around the lake. 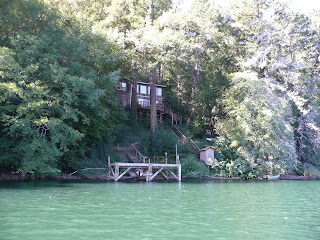 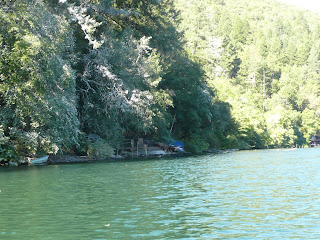 Later in the day we went tandem all the way around the lake from our end to the other end, in the Inflate-a-Yak of course. By the end of that trip, I was starting to feel it in my shoulders and had minor blisters on my fingers. Hey, I've got weenie hands, OK.

Wednesday morning found me in the Float Tube Cumberland heading toward the near end of the lake. There is some kind of motel or something down there.


By then, the wife was moving the Inflate-a-Yak like she's been doing it all her life. She was pretty much all over the lake.
I did get one drive by down by the motel, but that was it. I think I got some bumps, but one can't be sure.

Then I tried the fly I tied for last years trip (we didn't go because of the Butte fire) in the CalTrans colors. Hell, by this time I'd try anything.

So I'll leave you with the final sunset last night. 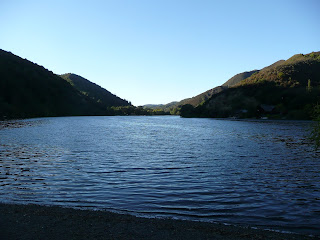 Farewell Blue Lake Upper (not to be confused with Upper Blue Lake) until next year (we've already reserved the spot).
Posted by Mark Kautz at 6:37 PM