By the way, the Cubs won the World Series yesterday just in case you've been in a cave somewhere. I'm surprised that Justin (Carf Outdoors) hasn't been all over this being the Cubs fan he is.

Yuki and I were going to hit the Mokelumne River Monday, but he brought up the fact that it rained like crazy over the weekend and would probably be blown out. Good point.

We decided on today instead. He suggested we fish up by the Power House. Made sense to me. After all, as a fish, where are you going to go with a 200' dam in front of you?

We parked and walked down to the river. This is the river locals call fishing Electra Road. "Let's go fish Electra Road". You get it.

I started with a Thin Mint.

That's Yuki way down at the other end.
Nothing on the Thin Mint so I switched to something fish lunchy looking.

I got this fly along with 3 others from, and I apologize for not being able to remember who, someone many years ago I believe from Oregon.

The next bunch of pictures are yours truly with "fish on".

Didn't want to horse him in.

Catch, net, photo, and back for another day.

I want to thank my personal cameraman for all the nice photos. Everybody has one, don't they?

Not too bad for the only fish of the day. That is the only fish for me today. Yuki , on the other hand got one just about the same size. Unfortunately Yuki needed three hands (one to hold the rod, one to hold the net, and one to take a picture), but he only has two and before he could get a picture, his went back in for another day. 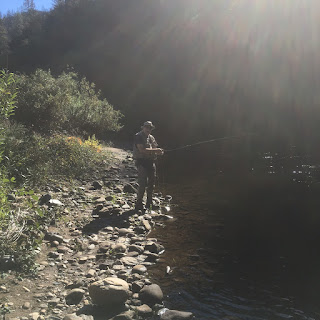 Trout season is rapidly coming to an end (November 15th) so we're going to try upcountry once more before then.