Wanted to get one more day in before the year expires.

Headed out to North Shore, more to give the wife a day to her self since she's off work today than anything else. But how better to accomplish that than to go fishing. Sneaky bastard.

Got to the lake about 9:00 and found the place packed. It was not just where I was, but the parking lot for boat trailers looked like a Walmart the week before Christmas. There was barely a place to park and get my fishing permit.

With permit in hand, I drove out to the usual spot, found an open space, and dropped in two lines with rainbow Power Bait. That is becoming the usual method with the cold weather settling in so I can enjoy my coffee (this morning from the local donut shop). Yes, I brought along glazed donuts as well (and shared them).

Dave, in the picture above (with the yellow and red jacket), is from Folsom and drove out to spend the day enjoying the calm and serenity of North Shore. He also came to catch fish and he caught a couple.

Right around 11:30 I noticed the line on one rod was straight out. Not doing the "fish on" bounce, but just straight out. I picked up the rod and sure enough there was a fish on it. The one in the picture below. Came in at about 2 pounds. Caught it on rainbow Power Bait.What else?????

Shortly after the other rod did the same thing. Line straight out and another one on. This one also about 2 pounds, but on white Power Eggs this time. Don't ever say I'm not diversified. The picture was an after thought while it was on Yuki's stringer. The first one I gave to Dave. 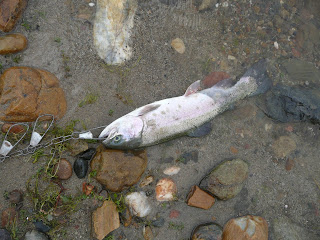 Within about 15 minutes, we saw a swirl just in front of where my rods were and one of the other guys we were talking with reached down and grabbed my rod and yanked it (I guess he thought he was setting the hook) and then laid it back down. I kept saying "I've got it", but he did it anyway AND, as it turned out, the fish was gone and my rig was hooked on the bottom. I won't say anything further. FYI, Yuki didn't catch anything today.

Well, that completes 2016 and the most dismal catching year I've had since I started keeping my journal in 2008. I won't throw out numbers because they aren't that important.