We heard that one of our old haunts had water in it again. We used to fish New Melones at the Tuttletown launch ramp, but the last time I was out there, you couldn't even see water.

Well, the lake had risen 43 feet with all the rain we've had so today it was "let's take a look at Tuttletown".

I got out there about 9:30 (it's a rather long drive) and Jim was just setting up. As you can see there is water.
On the way to the lake I stopped at Glory Hole Sports and got a couple containers of those little white floaty things. The two I had left were getting pretty grungy. I also picked up (as long as I was there) a carton of mini-crawlers.

I rigged up one rod with rainbow Power Bait and the other with a mini-crawler and a couple white floaty things.

Then I took some shots around the area to show you there really was water there. In the picture below, you can still see the green weeds. The water rose so fast that the weeds are still green out to about 10 feet.

Then Yuki got there and started putting together his gear. I might mention that by this time there hadn't been bite one. I did have what I thought was two bites on the Power Bait, but I think it was just fish swimming by and touching the line. You know, a twitch then nothing.

I reeled in the Power Bait line and with my little Okuma (2#) I started throwing a pink 1/4 oz. Kastmaster. Then I had an epiphany. I have these on occasion. The thought was that the Trout in this lake feed on Shad and since the pink Kastmaster wasn't working, why not try silver?

Only took about three casts and the first fish of the day came to hand. Right after that I had a second one on, but it was gone in seconds. Must not have had enough Superglue on the lure. I might mention that that was the first fish on my "new" little Okuma.

Shortly there after Yuki hooked up one on a kind of holographic Kastmaster. You all know Kastmasters come in a gazillion colors. This one was pinkish with black spots.

The Jim hooked his first on a kind of light green, frog looking Kastmaster.

Then that was it. Not another hookup the rest of the day. We either caught all the fish in the school or it moved on. My guess would be they moved on.

We called it a day shortly after Noon with Yuki needing to get one of his dogs from the vet and me having some errands to run. There is always next time.

The picture below, if you can find it, is of a Black Widow Spider I found on the top of my tacklebox as I set it in the truck. Make the picture big and it's right in the center at the top of the picture. 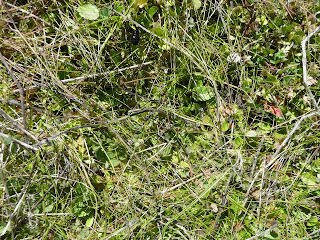 That was right before I stepped on it. Spiders fall in right next to snakes in my book. I'm not squeamish, but then neither is Indiana Jones. We just don't like snakes or in my case snakes and spiders.

Well, we have another storm coming in tomorrow and lasting to the weekend and another one starting on Monday so I'm not sure when we'll get out again.