I Think Trout Fishing Is Done Down Country

Yuki and I took one more shot at Lake Amador this morning. After today the temperature is going to rise rapidly. It's supposed to be 77 degrees today, but by Monday it's supposed to be 90 here and about 96 in Sacramento. After Monday, who knows, but much too warm for trout.

I also wanted to take one more shot at those little Bluegills, but with "3". And take a shot I did. Only problem I ran into was the wind. It was pretty calm when I got there about 9:00, but by 10 is was blowing hard enough that fishing with "3" was no longer an option, BUT I did manage a couple before I put "3" away. Fun.

I went to the truck and got my little Okuma and continued to hammer the Bluegills. I probably caught and released a dozen, but just didn't keep count.

Yuki had a couple lines out and I had one with rainbow Power Bait. And as luck would have it, Yuki went to the "little boys room" and he got the only bite of the day.

Now the question is who owns the fish? It was on Yuki's pole, but I landed it. Thoughts?

We also made a new friend. Ozzie (like Ozzie Osborne, his words) from Stockton. We filled him with stories of big catches, how to fish the lake, what to use, and managed to bomb with great flair.

Since my instructions (from the wife) were to bring home two Lightning Trout (which I obviously didn't) and Yuki was headed to the casino to lose more money, we gave the trout to Ozzie.

So I think it's time for my yearly Spring trip to Ice House for ice out. Maybe next week.

It Was Just A Monday Adventure

General Trout Season opened on Saturday April 29th. As you all know upcountry has been buried in snow up to their wazoo.

Oh, before I go any further, the trip to Mount Lassen Volcanic National Park got cancelled. Not looking for any comments here, but Katherine's ex and the father of her daughter, got killed in a car vs train accident last Monday. We decided it would be better to be here in case her daughter needed her. As it turned out, she was way stronger than we thought and with the exception of lunch on Saturday, she has come through just fine. So please, no condolences needed. I barely knew the guy.

So today I decided to take a drive up to Cat Creek Rd and see if the Middle Fork of the Cosumnes River was accessible. As in the past, just getting to the river was a challenge in Spring.

The first problem I ran into was the downed trees across the road. Thankfully someone (probably the Forest Service) was nice enough to go through and cut a passage. 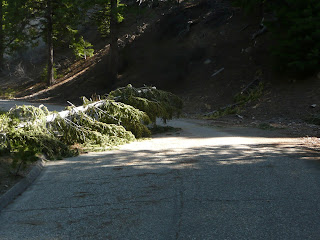 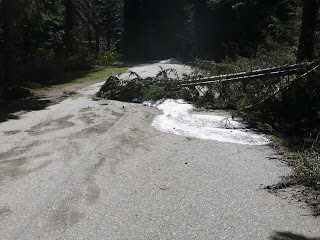 As you can see in picture above, the snow started to show up. The drive from the highway to the river is about 8 miles.

Hey, nothing I couldn't handle. Right.

This was just around the corner. No going past this one. Be a couple more weeks before this is clear enough to get by. 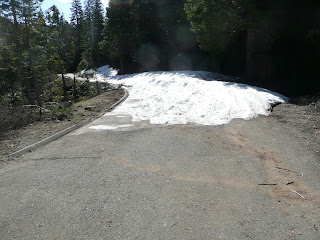 So I made a Ya'll can turn and headed toward the house. Had to stop in Pine Grove (up the road from Jackson) at the nursery for a couple more vegetable plants.

But before that happened, I made a sharp right on the road to PIPI Valley Campground to see if it was accessible. Sure enough, clear all the way.

The creek was running a little high, but there were a couple of small pools that looked promising. I would like to note at this time, that the last few times I've fished here (this is also the Middle Fork of the Cosumnes River) I've only caught one fish after walking the whole river from Day Use parking to the upper end of the campground. A distance of about a mile.

I started with a Sloan's Paralyzer just to the right of that rock in the middle. With "3" I was able to get several good casts, but still lost a couple flies to the trees. 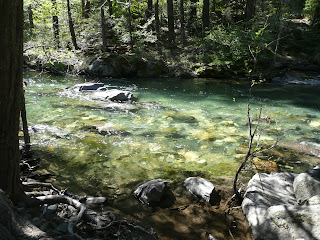 The I decided to see if I could navigate my way down to the pool under the bridge. Pools under bridges seem to be good on this river. 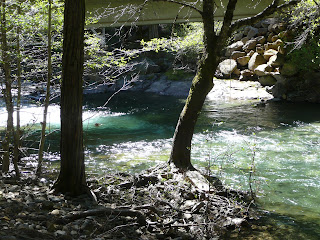 The following picture is from just under the bridge, down stream. When a dry didn't get any results, I put on a big, fat, nymph kind of bug and with a Tungsten bead and went deep. Worked it back and forth in the pool and even let it drift down stream a ways. Not a nibble. 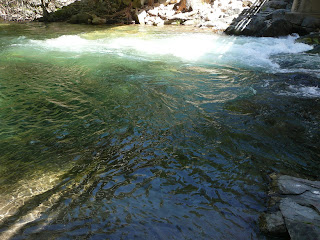 Just for the record, I took another shot downstream. Thought you might enjoy the clarity of the creek. 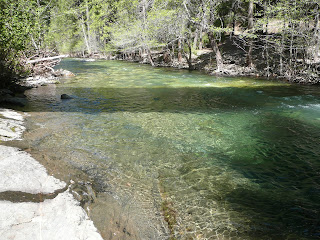 On the way out, I stopped for a picture of the Dogwoods in bloom. I miss the ones we had out behind the house up the hill.

It was a nice drive. About 50 degrees outside. I didn't take the water temp, but you can trust me on this, it was cold.

Made my stop in Pine Grove, stopped at Lowe's to pick up a new sprinkler timer and called it a day.

May get out to Amador or Camanche later in the week.

A Short Trip Out To The Lake

I suggested we give Lake Amador another try and see if we could catch some more of the Lightning Trout. Our plan was to meet at check-in at 9:00. I got there at 8:00 and Yuki was already there. So much for sneaking in early.

We set up at the same place as last week and it wasn't very long until the first fish came on rainbow Power Bait.

I tried to put it back, but it was  a little too worn out.

I was unsuccessful so we gave it to some people next to us.

In between that one and the next one, Yuki got a bite on white Power Eggs, but missed it.

Then the second Lightning Trout came, again on rainbow Power Bait. This one a little larger.

They give a much better fight than a normal Rainbow. No jumps (that I've seen) but good runs and a long fight.

While I was waiting for the next bite, I started playing around with a size 16 fly hook and a red worm for some of the little Bluegills swimming around the shallows.


This one was the first, and the prettiest of the 15 or so I caught.  Fun on the little Okuma, but would have been far more fun on my 3 wt fly rod.

That's it for this week. No fishing next week as we're off to Mt Lassen Volcanic National Park.

In the last post I tried to get statistics. I couldn't find anything so it was a calculated guess. This time I wrote them down when I saw them.

Here's this year vs last year percentage of full.

This is the latest in fence repairs caused by the Winter wind events. Between my house and the Bass house next door. Yes, his name is Bass and he also has a blog called, you guessed it "Kiss My Bass.net". 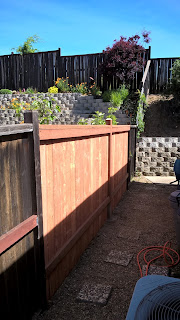 There is another repair in progress on the other side of the house, but still two more sections to go.

Stay tuned.
Posted by Mark Kautz at 7:59 AM No comments: