Let Me Take You On A Little Camping Trip Day 2

Just when you thought you'd get a bear story, I go somewhere else, but fear not, I will tell you a bear story.

What would be a camping trip without fishing?

Since Big Tree Creek turned out to be a swamp, I inquired at the visitors center and was told where to go, literally.

There were two options withing the park. I mean, I could have gone to Lake Alpine up the road a way or White Pines Lake back down the road a way or even Spicer Meadow Reservoir, but I've taken you to those places already.

So my options were: The North Fork of the Stanislaus River or Beaver Creek. So off we went. Besides there was Oak Hollow Campground we wanted to check out and see if they had spaces big enough for our trailer and that they weren't 50 feet from the Highway should we ever decide to come back and camp again.

The North fork of the Stanislaus River was in all it's snow melt raging glory. Kind of like the Cosumnes River back on June 5th, but a LOT more water and a LOT faster. Not anything a Geezer should be near. Beaver creek was our other stop.

I had the Park Rangers assurance that there were Rainbow Trout in this creek. Besides the sign by the parking lot said so too. My first fly was an orange stimulator. Only took three casts and the first Rainbow came to hand. Now I rarely say anything bad about my wife and current blog photographer, but she couldn't get the camera opened up fast enough for a shot of this huge 5 inch Rainbow. That was OK, there would be more, I was sure of it.

So while I was tempting and missing another half dozen fish or so, my wife and current blog photographer was catching some of the local butterflies having a drink.


I didn't have a lot of space to fish at that spot so we drove back about a half mile and walked to another access. This one had more space to fish. Even though it was quite warm, I didn't want to wet wade because I only had one pair of sneakers with me and didn't feel like encasing my legs in my waders.


As it turned out, I got a lot of hits and like the Cosumnes, those little buggers were faster than I was. I only brought the one to hand, but had tons of fun trying to catch the rest. As we were driving out, a teenager walked across the parking lot with one about 9" on a stringer. I had all I could do to keep my mouth shut about him killing that little native Rainbow, but it's not my place to get into a pissing contest with some idiot. Enough said.

Once back at camp we decided to take a tour around the North Grove. The first two pictures are what they call "The Big Stump". 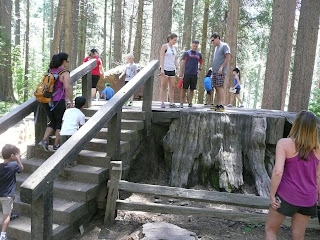 In the Spring of 1852 A backwoods hunter named Augustus T Dowd accidentally happened on a tree of monstrous proportions. This started the tours of the "Tree Giants". Like everything else unique, money became the draw. The following year this tree was stripped of it's bark and felled by ambitious speculators. Back in those days they didn't have a saw large enough so they used a long handle pump auger (a drill of sorts) and wedges to fell the tree. It took five men 22 days to drill all the holes, but the tree still took several days before it fell. The stump was planed smooth to serve as a dance floor, a two lane bowling alley, and a bar. 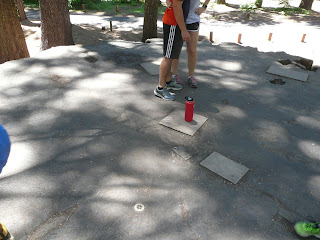 It was called the "Discovery Tree". The diameter is 25 feet at the base and estimated to have been over 280 feet tall. When the rings were counted (to determine the age of the tree) it was found to be only 1244 years old. Relatively young for such a large tree.

So, what about the bear? You'll just have to come back tomorrow.
Posted by Mark Kautz at 2:14 PM