When Andrew Lowen approached me about doing one about the "June Lake Loop" it tweaked a soft spot in my fishing heart.

One of the lakes in the June Lake Loop is Gull Lake. Many years ago I went on vacation with my 1967 Chevrolet Truck that looked like the picture below.

I had this piece of shit cabover camper on it and it was the beginning of "camper" camping for me. We drove up as far as San Francisco and I was able to see my cousin Mark (Yup same name as me. Same last name too). Unfortunately he was one that died too young. He was only 33 and died (I just found out recently from another cousin) of Lymphoma.

From there we swung across the state into Reno then down Highway 395 and stopped at a motel (for a shower) at Gull Lake. The experience at Gull Lake was one of those awesome fishing experiences. From shore, with a black Panther Martin, 10 Rainbows (the limit then) in about 20 minutes. I had never caught that many so fast. Sans the soft spot for Gull Lake.

In 2010 My wife and I passed through the June Lake Loop on our way to visit my cousin in Kernville. It was one of those deja-vu, goosebump, experiences.

So when Andrew approached me, I couldn't say no.

The only thing better than plentiful trout fishing? Plentiful trout fishing in the heart of the eastern Sierra Nevada mountains in Inyo National Forest. This is a beautiful area that's well-stocked and has brown, cutthroat, rainbow, and even the occasional brook trout. Alpers trout are planted in the region for more variety.

The June Lake Loop is a special place, not just because of the fishing or the natural beauty, but also for the sense of community. Newcomers and those who've been around before will feel welcome and right at home.

There are four main spots in the June Lake Loop where serious anglers can get in on the action. 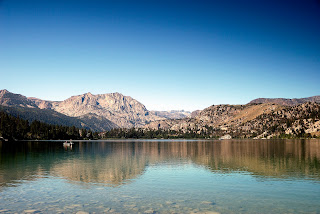 While the namesake of the June Lake Loop isn't the biggest lake in the area, it's the best-known. Don't be afraid to try roadside spots when looking for the best fishing; the coves near the lake's marinas are known to be great choices too, as is the middle of the lake off the far shore. One rule of thumb? The harder a spot is to access, the better the fishing. Think of it this way: more people will opt for the easier places, creating more competition. Go for the trickier locales (safely, of course!) and reap the rewards.

One favorite spot? The area near Boulder Lodge on the south-central eastern shore. Don’t forget to grab some mealworms to enhance your bait arsenal: since mealworms are so similar to a trout’s springtime diet there’s a good chance they’ll take a nibble on one. 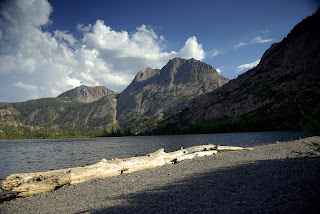 Silver Lake is the place to go when you want to take your fishing just a little slower. Not only is it a great place to catch brook trout and rainbow trout, but the views are divine. We recommend Silver Lake in particular for its natural beauty, including “idyllic views and phenomenal sunrises.” Start out early in the day to catch a glimpse of the sun rising over the lake and be sure to take your time and really savor the wilderness.

Don’t forget to check out Rush Creek’s entry into Silver Lake for some great fishing! 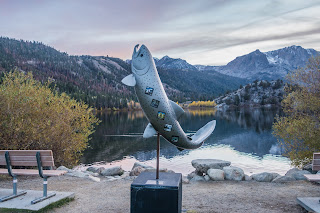 This small lake just southwest of June Lake is a favorite among fly fishermen. Be sure to stop in the Gull Lake Marina or one of the numerous local bait shops to get the exact location of “The Rock,” a favorite spot known for its great fishing.

Gull Lake is also one of the more family-friendly spots in the June Lake Loop, since it’s a great place for kayaking, canoeing, and other water sports. There’s a little something for everyone here! 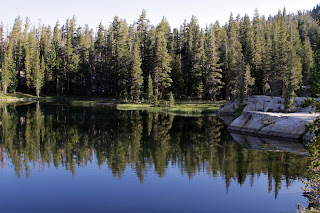 This is the largest lake in the June Lake Loop. Due to its 1,100-acre size, Grant Lake is popular for water skiing, jet skiing, and wakeboarding, all permitted to take place after 10:00 AM. Fishers shouldn’t be deterred, though; the lake’s size allows for everyone to have their own fun. If you’re looking for rainbow trout, Grant Lake is the place! Try Sheepherder’s Bay, and don’t hesitate to set up somewhere on the eight miles of shoreline that offer plenty of great spots to try your luck. Those looking to catch brown trout should try the peninsula.

Since the success of a good fishing trip is due in part to things that are out of your hands, like weather and unforeseen circumstances. The best way to plan and enjoy your trip is to build some flexibility into the itinerary. You don't have to plan for the apocalypse or get too extreme, just be sure to leave yourself some wiggle room in case you need it.

Also, don’t be afraid to get back to basics! No matter how experienced a fisherman you are, it never hurts to bring an extra fishing map, have a chat with some locals, and ask for advice. After all, fishing is about more than just fish: it’s about learning, relaxing, and appreciating the world around you.

Andrew Lowen and his family have been a part of the June Lake community since 1968, where they now own a Yosemite Gateway Chalet. They love June Lake and are eager to share the experience with those who appreciate the grandeur that the Eastern Sierras have to offer.

Thanks Andrew. So if you're down that way, stop in at The Yosemite Gateway Chalet . It's a mighty nice looking place to stay.
Posted by Mark Kautz at 2:32 PM