Three Shocks In One Day

I would have posted this yesterday after I got home, but I was watching the Dodgers beat the Astro's in the World Series game 1.

About a week ago, Yuki and I planned a trip to the Secret Lake. After looking at my journal, Fall was the time where most of the fish were caught there so it was time to go.

Since my truck is in the repair shop (my wife had a yellow post, you know the kind in a parking lot, jump out and hit the truck one day when she was driving it) so Yuki drove.

Keep in mind that the road to the Secret Lake is one of those mountain roads that is straight up on one side and straight down on the other. Kind of scary for one who doesn't drive those kind of roads very often. Now, I didn't hold Yuki's hand (he had both tightly on the steering wheel), but gave him words of encouragement like "Don't be a weenie", "It's not the fall, but the sudden stop at the bottom". Words to keep him focused. I think he'll make me drive the next time.

We got to the lake about 10:30 and started floating crickets at the inlet.


The first shock of the day was a small (about 9") Rainbow. I didn't know there were Rainbows in this lake. I always thought it was strictly Browns, but one must have come through the tube from Salt Springs Reservoir. It was such a shock that I didn't even take a picture.

The second shock was the Brown in the picture below.

It doesn't look very big in the photo, but my guess was about 16" and maybe a couple pounds.


Then yours truly continued to swing crickets with several additional hits, but no hook-ups.

When we finally ran out of crickets, I decided to see if a Kastmaster, which in the past produced nothing, would get any interest. Then the third shock of the day came. I put on a brand new 1/8 oz. gold and threw it toward the inlet tube. The second cast and the fish below was on. Turned out to be (my guess was a female with eggs) because it was a 'football" and no hooked jaw like the first one.


After that, no interest in any other color of Kastmaster, Power Egg, Mice Tail, or nightcrawler.

Well, At Least I Tried

I texted (21st century phone guy) Yuki yesterday about fishing. Basically I said I'd go fishing if they ever planted again. The last place they planted ANYWHERE was Silver Lake back on 9/3. Before that was the end of July.

He suggested Middle Bar Bridge. So I said, OK I'd check it out this morning.

I cruised over (It's only about 4 miles from my house) and when I got there, the bridge was empty of people, a bad sign. The shot above was not this morning.

When I looked over the side the water level as 12" deep, maybe 18" at most. You could see everything on the bottom in great detail. That would make it about 4 feet lower than it needed to be to do any decent fishing.

It wasn't quite as low as the shot below, but close.

All I can hope is that Lake Amador and Lake Camanche start planting soon.

One last item, flippering in the Float Tube Cumberland (as mentioned in the last post) doesn't seem like something that's going to happen. I'm experiencing quite a bit of pain in my feet because of the neuropathy, so the movement of flippering is definitely not in the cards. Maybe one of these days I'll just suck it up and give it a try.

OK, So It's Been Two Weeks

Two projects have kept me from fishing for two weeks.

First is the back yard. It was something like this:

Flagstone filled with pea gravel. Looked like crap and hard to walk on. 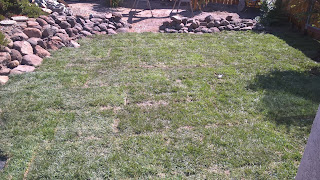 The second project is the fence around the back yard. Last Winter I replaced 3 sections and the gate that blew down during a storm. Later last Winter I replaced 3 more sections. Another storm. Now I'm replacing the rest. It seems that the fence is falling apart faster than I can replace the sections. Every time I work on one section, the boards from other sections fall off.

I only have the strength to replace about one section a day and then I have to quit, so it's going to take a while. I have 14 more sections to go.

I made the mistake of leaving one section open overnight and the deer (you know the City of Jackson apple cleanup and hedge trimming department) helped themselves. I guess tomatoes aren't as good as apples since they just took a bite and then dropped the tomato. Kind of pissed off my wife. She babies her vegetables.

I guess you can say that fishing is on hold for a while, but don't forget me. As Arnold said "I'll be back".
Posted by Mark Kautz at 7:33 AM 4 comments: