Let's see, where did I leave off. Oh yeh, the creek.

Beyond the creek you get your first glimpse of Mt. Lassen. Note the front side is missing a bit of, well itself.

Then further along, we came across this site. Part of the 875 stations to study the movement of the earth's crust. You can read the rest. 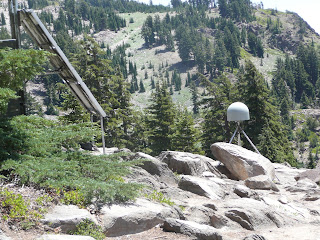 Then a little later, the back side and trail to the top Mt. Lassen.

Patrick, we didn't hike any of the trails because of the leg problems I'm having and because my wife is recovering from foot surgery. We kept the walking to a minimum. 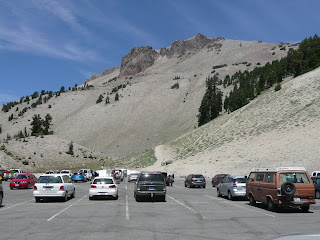 Still snow at 8500 feet.
The next two shots are of Lake Helen.

This lake has special meaning for me. I came to Mt. Lassen Park back in the early 90's. It was one of those days when it was 113 in Redding (not much difference from 111) and in the higher elevations the temp was a bit lower, say high 90's. I saw Lake Helen and my first thought was to run down and take a dip to cool off.

Then I read the brochure that said the AVERAGE temperature of the lake was 64 degrees. High 90's to 64 degree water, I don't think so, but I've never forgotten.

Next stop was the sulphur works. As you know, sulphur = stinky. 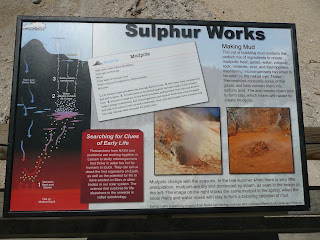 I snapped a couple stills and a short (8 seconds) video. Can't understand why, when you're standing next to stinky bubbling sulphur 8 seconds seems like 8 hours.

Sorry, but apparently the movie doesn't want to work.
On the other side of the road is where some of the run off occurs. Note the yellow sulphur streaks. 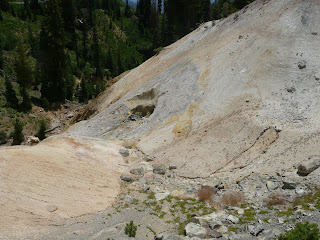 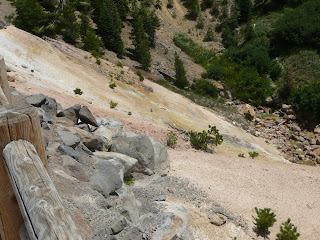 From there it was out of the park and by then, time for something to eat. We exited on Highway 36 in the Red Bluff (about 30 miles South of Redding) and attempted to find a decent restaurant (my wife doesn't eat fast food) for lunch. We drove around for a half hour or so and decided on Win-River Casino. Nothing like eating at the competition (My wife works for Jackson Rancheria Casino).

So tomorrow (yes one more post) will be Castle Crags State Park and Yak's on the 5 and that burger, but to whet your appetite, here's something to look at.

They are from Yak's too and they are AWESOME.

See you tomorrow.
Posted by Mark Kautz at 8:16 AM