After arriving Thursday afternoon in beautiful (brown and ripe for a fire, in fact we got stalled on the freeway for an hour an a half as an RV burned [screwed up his weekend] along with grass for a couple acres) downtown Redding, California. Just for those who are unfamiliar with California, Redding is 150+ miles North of Sacramento on Interstate 5.

Oh, did I mention it was 111 degrees (yes that three 1's) when we got to the RV park. I had all I could do just to get the trailer set up in that heat. We fired up the air conditioner and called it a day.

Friday morning had us heading out Highway 44 to Mt. Shasta National Park.

The museum at the beginning of the park gives you the whole story of the Mt. Lassen eruption on 5/22/1915. I was just a kid and don't remember it very well.

As you walk in the museum, across the road is Manzanita Lake. Don't know if there are any fish in it, but didn't matter since I didn't bring any fishing equipment. Why? you ask. Well I had plans to fish the Sacramento River by the RV park, but being a good fisherman and checking the regulations before I left, found that the whole river was closed for some Salmon/Steelhead restoration or some such thing, so I left my gear home.

The next picture will give you some idea of what happened that fateful night at the beginning of the eruption.

We continued through the park looking for Mt Lassen. If I has to guess, I think this is called Chaos Crags.

And somewhere along the road we came to Brokeoff Volcano. Mt Lassen? Not yet. Double click on the picture and you can read the info. 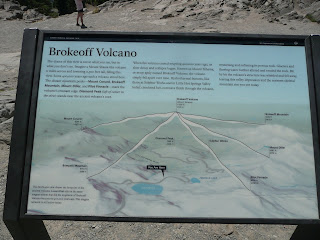 And then, without any fishing gear I came across this creek. It was right along the side of the road and easily accessible. Just out of curiosity (I had a stone to throw at the fish if I saw any, just kidding) I walked along for a bit with my camera, but didn't see fish one.

There is much more including the awesome burger.

You didn't think I'd give it all to you at once, did you?