Upper Lake, The Rest Of The Story

Here's how it went.

Left about 10:30 with a four hour drive to Upper Lake. Stopped half way for a Mexican food lunch (I had a burrito and Katherine had quesadillas) and this little guy joined us, but on the outside of the window.

Got to the lake around 2:30/3:00 and after setting up the trailer only had time to throw a few Kastmasters off the dock. No fish to be found.

Day two, Monday. Awoke to winds around 10 mph coming straight across the lake. Too fast to put either the float tube or the inflate-a-yak in the water. So I went up to the office and got a carton of crawlers. I put one out on a slip sinker rig with a couple white floaty things to keep the crawler off the bottom and on the other rod hung one about 3 feet below a bobber. No fish to be found. 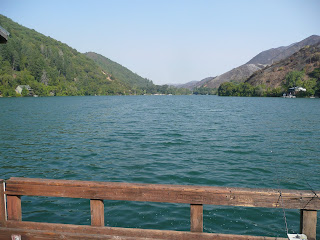 While I was waiting around for the bite that never came, I snapped a couple shots of the previously green hillside across the road from the RV park. The next three photo's are the result of the Ranch Fire that is still burning as I type this, but on the North and East side of the fire.

Day three, Tuesday. We awoke to calm winds and little, if any waves. Launched the Float Tube Cumberland and the Inflate-A-Yak. I in the float tube, Katherine in the yak.

Then I had a small problem. You see, the crawdad imitation was a bit big. So big, in fact, that when it got water logged, it broke the 5 lb leader I had it on. It was too heavy. OK, so I put on a Clouser Minnow in green and white and tried that. Cmon, you guys know I'm no Bass fisherman. I was groping here.

The reason I waited to comment more on this picture is that the River Fire (that and the Ranch Fire made of the Mendocino Complex Fire) stopped on the other side of this hill. A mere half mile away. 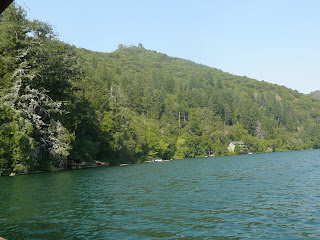 Day four, Wednesday. The day dawned with winds more that we had previously. Maybe  to 10 to 15 and even whitecaps on the lake. No tubing that day. Fished off the dock with white Power Eggs. No fish this day either.

The picture below is how Day four ended. We were headed home the following morning (Thursday, that would be today). 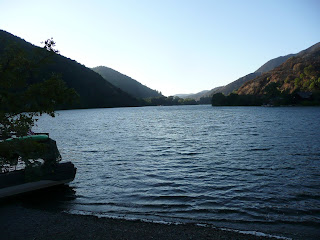 One thing I wanted to add is that the owners of the resort, even though everyone else had evacuated, stayed during the fire. The boat in the above picture is theirs and they spent a good bit of time on it and in the center of the lake while the fire (as seen in the pictures above) raged across the street. Braver than I'll ever be.

OK, here's the result of the morning in the Float Tube Cumberland. On Tuesday afternoon I had increasing trouble walking. By Tuesday night, it was getting worse. It wasn't just hip pain this time but pain all the way down BOTH legs. Tuesday night into Wednesday morning brought cramps in both legs. And let me tell you, drugs were only taking the edge off.

The decision, made by both Katherine and I is that float tubing is out also, BUT there is a Plan B or maybe C. Could be D, in the works.