A Lot Of Updates

Since I last update about the whole Genealogy thing, this photo showed up from a "new" cousin. The last update (August 16th) I showed you the picture of my Great Uncle Christoph and his family. 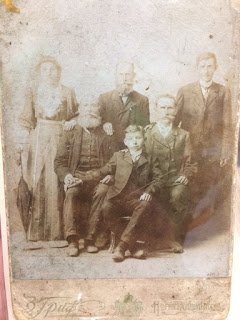 With that part zeroed in, I've traced, via DNA matches on Ancestry.com to one Gottlieb Martin Kautz who I believe is the man in the picture.

Now a medical update. I saw the Orthopedic Surgeon on Tuesday. He looked at the X-Rays and the diagnosis from them. Here's what he had to say. Good news - I don't need a hip replacement. Bad news, there isn't anything that can be done (Steroid shots are not an option because of the blood thinner I take) until, and I quote "My hip tells me it needs replacing". Could be years, could be never. In the mean time mind where I walk, use the cane, take drugs if I'm in pain.
I've been to 4 doctors and the consensus of opinion is that I have Osteoarthritis in both my lower back and my left hip.

So I did the only thing one would do under those circumstances. I went fishing.

Yuki and I were supposed to go out to Lake Tabeaud this morning, do a little yakking, and see if we could catch anything. He sent a text last night cancelling because he's down with the creepy crud (for those not familiar with that phrase, a bad cold).

Not wanting to yak alone (not confident enough yet), I threw my gear in the truck and headed up the hill. Silver Lake was my destination. I thought that the place Yuki and I fished the last time would be a good place to start. It seems to be lacking in water.

Last time all the land you see in the front of the picture was under water.

I did cast out both rods, but based on the amount of "sink" it couldn't have been more than 18" at best.

So I took a photo of the Fall foliage across the lake. There was a lot of yellow up the hill.

Packed up and drove back to the Day Use area, but the gate was locked and it was more of a walk than I felt like attempting. So I headed for Caples Lake.

I didn't think I could negotiate the "dead tree" area so I went to the dam. I was able to walk down and set up, maybe 50 feet in from the edge of the dam.

One rod out with PB and the other with a crawler and a couple white floaty things to get it off the bottom. Once I cast out, the water was a good 15 feet or more. Much better.

In the picture below, I've fished from that area on several occasions and had fairly good luck.

Tried Kastmasters too.
I expected cold. It was (according to the weather guessers) 26 degrees in South Lake Tahoe (elevation 6237') this morning. Caples Lake being 8000 feet, I guessed would be as cold or colder.

In the photo below I wanted you to see the snow still on the mountain. Don't know if it's left over from last Winter or from recent rains. Elevation of that hill is about 9000'. 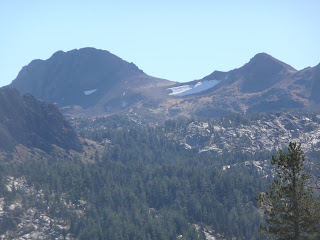 Stay tuned. I'm only getting started again.
Posted by Mark Kautz at 2:32 PM