I Seem To Have Lost My Mojo

I got out to Lake Camanche at 8:15 with the intention of trying some new baits. A week ago I cruised out to Berkley's website and bought a bunch of Power Baits and Power Eggs and wanted to see how they worked at the lake.

I put speckled rainbow PB (I'll try anything) on one rod because that seemed to be what the guys around me were catching fish on. The other rod I put 3 Power Eggs and the best I can explain it was half chartreuse green and half speckled greenish clear.

In the mean time my neighbor for the day, John (he lives in Jackson too) almost had his rod pulled off the shore. It took almost 5 minutes for John to bring this one to hand.

He and a couple guys from behind me fiddled around for a while trying to figure how big it was. It was then that I walked over with my handy dandy digital scale and that sucker came in at 6 lbs 5 oz. 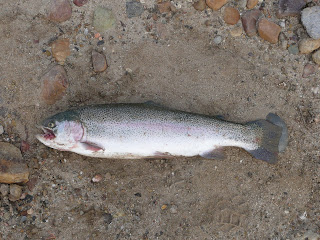 This is so you can get a better look at what a BIG rainbow looks like. He took it over to the marina and got his picture taken and I think they give a Lake Camanche coffee mug for a fish over 5#.

Mean while I'm still sitting waiting for my first bite and John pulls in another little one.

I change to plain old rainbow Power Bait (old faithful) on one rod and white Power Eggs on the other.

Fish were being caught down the way and behind me, but not where I was sitting, in fact I didn't even get a bite all day.

I Seem To Have Lost My Mojo.

Maybe next time.
Posted by Mark Kautz at 1:25 PM