A Little Bit Of Humor

I went fishing last week. Wasn't worth posting about.

We simply can not have criminals putting themselves in harms way at those temperatures. If we didn't speak out against this, it is simply not fair to the criminals and I'm not willing to risk it.

Hope you got a laugh from this.

Going to rain the rest of the week. Fishing next week.

I got a new fish finder for the kayak. Once I figure out how it works, I'll show you.

Sneaking Out Between Storms

I mentioned, in the last post, that we were in for some rain. Actually I mentioned we were going to get "pounded". Well, we got "pounded". Last Sunday we had 25 to 35 mile per hour winds (with the rain) and gusts close to 50 mph. So bad, in fact that Yuki had the roof blown off one of his lean-to's.

Since we're due to get more such weather starting tomorrow I thought it good to get out today. Probably my last chance for another week or so.

Earlier this week, Yuki sent me a Facebook link about trout being caught at Lake Camanche on grubs. I took that to mean Meal Worms or Wax Worms. So when I left the house this morning, after a coffee stop at Java Drive I stopped by Walmart and picked up a container of both.

Several years ago a guy at Bear River Reservoir introduced me to the "slip bobber" rig. It works well with Meal Worms and would seem to work well with Wax Worms too. The nice thing about the slip bobber rig is that you can adjust the depth of the worm by moving the green thread thing in the picture below up and down as necessary.


When I got to the lake I put one rod out with rainbow PB and the other with a Meal Worm. While I was waiting for the first bite, the fog started to move in.

It really moved in and as it covered where I was fishing, all became calm. The bobber just sat where it was instead of floating with the breeze. Just as fast as it moved in, it moved back out again.

Somewhere around 9:00 I got my first bite, but missed it. I think I was just a little too quick in setting the hook. It was on the Power Bait rod.

Then about 15 minutes later I got the second hit and this time I brought the one below into the net. Doesn't look very big in the picture, but I estimate about a pound and a half. Seemed like the going size today. It was also the first fish of 2019.

My friend Reuben (whom I haven't seen in almost two years) was there and he had caught one so I asked if he wanted this one to add to his stringer and he did.

After that one, I rigged my little rod with 2# with a slip sinker rig and put rainbow PB on both rods.

I like to consider myself to be a "fair" fisherman and fishing for good sized trout on 2# to me seems "fair". Well, fishing for trout in Lake Camanche isn't exactly "fair" on the fishes part. The next bite came on the 2# and it wasn't long before the line snapped and he was gone. I decided to rig the other 4# rod.

As it turns out, that was it for the day.

So I'll wait out the coming storms and be back out as soon as I can.

Oh yeh, the "grubs" that Facebook was talking about are those rubber things with the wiggly tail.
Maybe next time.

First Of The Year, Last For A While

Not to worry, I'll still be fishing.

This was the first trip for 2019 out to North Shore Lake Camanche. The place where I usually fish was a bit crowded.

So I bypassed that spot for one a little farther out the North Shore peninsula.

I set up one rod with rainbow Power Bait, as if you didn't already know that. On the other rod I put 3 green/clear with speckles Power Eggs.

I let that soak for an hour and then changed the green to white ones with the clear speckles. I put on fresh rainbow PB on the other one just in case.

An hour later I reeled in the Power Eggs and started throwing Kastmasters. Silver, silver/green, pink, silver/blue, and then the green Magic Bullet. Nope, nothing.

Changed the white eggs to brown/clear with speckles and rainbow PB on the other.

Took another picture to show how far out on the peninsula I was. That's the very end just beyond my truck. The whole peninsula is only about 100 yards. 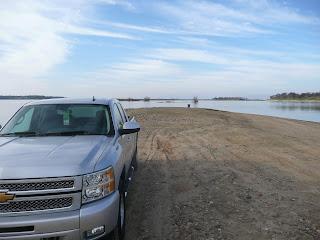 Well, it was a bust for the first day fishing in 2019. Actually, I didn't see anyone catch anything so I don't feel bad getting skunked.

Now, the second part of the title. It's going to rain. It's going to rain starting tomorrow morning and rain until, who knows. The desk person on the Noon news said we're going to get, and I quote "pounded". One of those "batten down your hatches" kind of storms we get every once in a while.

So it'll be a while before I can get out and fish again.

Mike over at Troutrageous! mentioned we should do a recap of 2018.

OK, here it is in a nutshell.

Fishing wise, it pretty much sucked. I don't think (without going back and counting) that I caught 10 fish this year.

Health wise, it pretty much sucked. Four doctors, Two X-Rays, one MRI and all they could tell me is that "until your hip tells you it's time for a replacement", you're going to hurt.

I'm going to fish anyway whether I hurt or not. Actually I don't hurt when I'm fishing, it's the next day that I pay the price.

After a week at windy Upper Lake my wife was convinced that the Inflate-A-Yak just wouldn't cut it. We got His & Hers Kayaks. You saw the picture. We've only been out once since we got them, but can't wait for it to warm up to get back on a lake.

The family welcomed my Great-Granddaughter Mavis Ranae Bonnie. We were over to my sons last Sunday and Mavis is just about as cute a baby as you can get.


Let see, what else?

Oh yea. The genealogy thing. Found out my Great Grandmother's name. Apparently none of my Great Grandfather's children knew their mother's name except Great Aunt Louise. Once we found the documentation showing that all the children (six that we knew about and two that we didn't) had the same mother, we had it nailed. More research to be done.

Fishing license. A lot of the locals still go to Walmart or Big 5 to get their new fishing license. It is so simple to do it online, I'm not sure why they still do it the old way. I got a notification from DFW that the 2019 licenses were available around the first week of December. Click on the link, enter your GOID number off your license. Click fishing license and second rod stamp and voila, it's in your mail box in 3 days. How easy is that? Even a caveman could do it.

I also have to mention our favorite commercial on TV. I know there are a million of them, but the GMC Black Friday commercial was #1. Click on the link.