You remember the post about a month ago when Yuki and I fished Woods Creek at the outlet of Woods Lake. Here is a reminder.

Well, yesterday we put our kayaks in and I had a couple things I needed to do at the lake. First I wanted to try out the (now not so new) fish finder. I still don't have a handle how that thing works. I'll only say that it kept flashing 19 ft even when I was sitting on the shore. More research needed.

So after getting my Lifetime Kayak (total weight 50 pounds) in the water, we put Yuki's new (he didn't tell me he bought a new kayak), in. I don't have the information on his kayak except it is a fishing kayak and the thing weighs about 300 pounds. I lost all though of information just struggling to get that sucker in the lake. OK, so maybe is only weighs about 90 pounds. Either way that kayak is HEAVY.

Good, now we're on the water paddling to the other side which he says is where the fish are. He's already been yakking in the lake before with his daughter the Biologist and awesome photographer.

There are a lot of little water falls feeding the lake with last years snow runoff. As usual, click them to make them bigger. 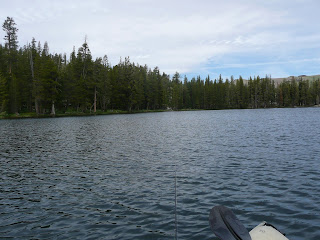 You notice how much snow can melt in a month. From July to August sure makes a difference.

I suppose I should say something about the other reason we came to Woods Lake, fishing. Since this is a fishing blog it seems the right thing to do.

I started with a Thin Mint on my lake rod with intermediate sinking line. When nothing hit, I switched to a black Woolly Bugger. In the mean time Yuki is over there in the Ocean Liner kayak (it's 12 feet long) yelling "I got another one".

One time I looked over at Yuki and he was standing up in the kayak. One would think after the Yuki incident of March 25, 2013, he would be strapped into the chair with a seat belt. He's braver than I am.

On with fishing. Since none of the flies I tried (including a Mickey Finn, good for Brookies) I switched to my spinning rod and Kastmasters. Silver Kastmasters always worked good in Red Lake, why not here. Because this is Woods Lake not Red Lake. Jeez they are only about 5 miles apart. Is there no communication between lakes up there?

Well, when flies don't work and Kastmasters don't work, one has to slump to the depths of night crawlers. I got a single hook from Yuki (obviously I wasn't planning on fishing worms) and a half of crawler and stuck that worm out there. Damn if I didn't get, not one, but two bites in about 10 minutes. Caught me so off guard I missed them both.

As a last resort I put on the other half of the night crawler on and sure enough this one I hooked and brought to hand. Small, about 7 inch Brookie, but big enough (3 inches would have been big enough) to scare away the skunk.

With one fish (slipped back into the lake before I could get my camera out) and 2:00 pm rolling around, we called it a day.

Next trip is Upper Lake camping with the family at the end of this month.