In 2018 our family welcomed Mavis Ranae Bonnie my Great-Granddaughter. Christmas 2019 found her so mobile that she's being fenced in. OK, fence around the wood stove. Fence around the TV. Fence blocking the doorways. Mavis containment at it's best.

In February I announced that I'm really a Fish. You know my Grandfather Henry Joseph Fish. I also mentioned that I got a fish finder (I was easy to find) for my kayak. Still got it, haven't used it but once or twice. Still don't know how the darn thing works.

May found me at Pardee Reservoir. I rarely fish Pardee, but a 4 lb 5 oz Rainbow will probably change that in 2020. Pardee doesn't open again until February.

Somewhere in the thousands of pictures I have is the shot of the Rainbow. If you really want to see it, go Here.

June found us camping at the worst campground we've ever been in. Barrett Cove at Lake McClure. A wild fire waiting to happen.

The 29th of June got my wife in her kayak out on White Pines Lake in beautiful downtown Arnold, California. Don't have a really good picture of her in the kayak so I'll pass on posting a shot.

At the beginning of August found Yuki and I on Woods Lake. Me in my Lifetime 10 footer. Yuki in his Ocean liner (seems like 15 feet long and 900 pounds although I think it's 12 feet and about 150 lbs.) kayak. He caught all the Brookies using worms. I caught nothing.

July, camping at Hope Valley. Kayaking and fishing Lower Blue Lake with my wife and step-daughter.

The very end of August put us at our perfect camping spot at Upper Lake with my son and daughter-in-law in the space next to us. They love it so much they are coming with us in 2020 and 2021.

Thought you might need a sunset picture. From the door of the trailer.

September was Hendy Woods State Park and wine tasting in Anderson Valley. That trip was expensive. No $8.09 bottles of Barefoot Pinot Grigio like we get from Safeway.

September also brought the "Out of control" garden, tomato jam and more tomatoes and squash that we or our neighbors could eat.

October.......Yeh October. Pacific Gas & Electric shut off the power to 800,000 people because of a "wind event" at mid-night on October 8th. Sometime between then and 8:00 am on October 9th, some low life scumbag stole our Freedom Express Travel Trailer. Didn't even bother to take off the Winter wheel covers. Just drove them off as they jetted out of the "no longer" secure trailer storage area.

Insurance paid it off and I filed a claim against PG&E for the difference between what the insurance gave us and what it cost. Their response was "Not our fault". Hard for a little guy to fight a multi-billion dollar company for a couple thousand dollars.

So, in early November we brought home our new Lance trailer. 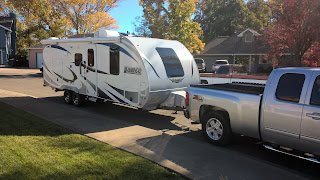 If you've never seen this commercial, Watch this.

My wife walked out of this trailer on the lot and said, and I quote "I love it". Guess we were taking it home.

December I started the "Small Town America" series with Volcano, California and then Amador, California. More to come in 2020.

Fished a bit in December and had the great Comorant mystery.

And on December 5th, Sacramento County Sheriff's found the Freedom Express. It was in Sacramento and people were living and doing whatever in it. Never would have wanted it back, besides it belonged to the insurance company. All I wanted was 5 minutes with the people who were in it when it was found. No such luck, Sheriff's Department has no sense of humor.

Visited the Orthopedic Surgeon for an update on my left hip and if it's going to need to be replaced. X-Ray showed increased wear, and the addition of a couple of cysts. He thinks sometime in the next 2 to 6 months it will need replacing. I'll see him again in June if not before.

Oh, forgot one thing. On Christmas Day at my son's house I found out I have another Great-Granddaughter. Her name is Isabelle. Take a look.