Amador City is another of those little towns in the Motherlode. It was originally discovered in 1849 by a group of gold miners, one of whom was Jose Maria Amador.

Like Volcano in the last episode, Amador City is a one "main" street town and has a pivot point where you can look one way in the direction of Sutter Creek (that's for another day) and the other direction Westerly. West from Amador City, there isn't much except farms, highways, open country and eventually Sacramento.


When you come into town, THE PLACE to stop is Andrae's Bakery. That's it below. They have the BEST pastries, I think the phrase is "to die for". Yes, I stopped in when I was there this morning and got a couple cinnamon rolls, a couple cinnamon pull-aparts for the wife, and being the nice guy I am, got a dozen Nibby Cookies (kind of chocolate chip with nuts and other stuff) for the Yahoo's Katherine works with.

For a long time I thought the building below was the Amador Hotel. Might have been in the past, but it's now a business complex. 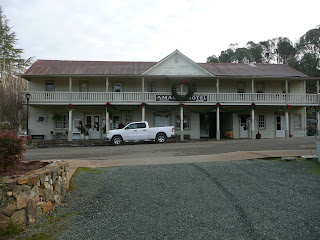 As you walk in front of the business complex toward the end of the street, you cross Amador Creek. Probably still gold in that creek.

Volcano had minion's, Amador City has dinosaurs. I believe (and I'm not up on my dinosaurs) this might be a T-Rex. Can you hear it roar?

We have a company in town called "Poor Man's Bronze". They make hundreds of different pieces of yard art and garden statues along with an occasional dinosaur and a Sasquatch or two out of cast aluminum. They've even made a a fly fisherman. In my opinion, they are pretty talented.
Finally and the end of the street is the Imperial Hotel, Saloon, & Restaurant. Great place, good food, nice rooms, and I'm sure, haunted. Hell, everyplace in the Motherlode is haunted in some way. Sometimes I think my own house is haunted. Knocks and bangs happen all the time. Most contributed to house noises, but the rest??????

The Imperial dates back to 1879. It has a very nice dining room and the food is excellent. We've eaten here many times. It has 6 rooms (from $110 to $165 or so depending the time of year) and 3 suites (from $125 to $200 again depending on the time of the year) if you wish to stay the night. One day I was talking to Laurie Lockhart out at Lake Amador Resort and she told me she was at the Imperial hotel (I think that was where she said) walking down a hallway and a cowboy walked up to her and poked her in the chest. Apparently a cowboy from years past. Staying the night could be interesting.

In 2016 there was a re-do of the movie The Magnificent Seven staring Denzel Washington, Chris Pratt, and Ethan Hawke among others. It was based on a town called Rose Creek. All through the picture they keep talking about Amador City and going to Sacramento. It didn't look anything like the surrounding area because it's hard to compare Amador County with Baton Rouge, Louisiana where it was filmed.

OK, that's it for this episode. We'll go someplace else in a few days.