Let me start with the Quackenburg Church Register.

Back in the old days when a person is born, married, or dies a record is kept by the town mayor or some official in that town. Once a year or so the traveling church representative would come by and record all the information in the church register being it Lutheran, Baptist, or Catholic etc.

When my relatives moved from where ever they lived (haven't found that place yet, but I'm thinking Poland based on Great Uncle Herman speaking High German [a refined type of German] and Yiddish) to what is now Ukraine, the births of the 9 children of my Great Grandfather and Great Grandmother were recorded in the Lutheran Church Book in Volhynia. Had this not been done, we (my cousin Dan and I) would still be looking for the original 5 children mentioned in Great Aunt Adina's letter from 1990.

In looking at the GEDBAS database it also seems that Quackenburg was the Las Vegas of Poland. Seems most marriages took place there OR were just recorded there. At this point I don't even know if there was a ceremony or maybe they just jumped over a broom or something and were considered married until it was recorded in the church book.

Just this morning I found another European genealogy site. Maybe I'll find something there.

One of these days I'll find them.

Email ThisBlogThis!Share to TwitterShare to FacebookShare to Pinterest
Labels: Genealogy

I don't know if you're interested in my past family, but I thought I'd throw this our here anyway.

If I've mentioned this before, just keep reading. It'll get better.

When I do a search for one specific relative, I check all the normal websites. Ancestry, MyHeritage, Family Search, etc. Back in mid-January I was looking for that specific person and couldn't find anything more than a date of birth. I have something like 25 different sites I can look at, but again when you find a person is from a particular country, that narrows down the places you can look.

So, on January 15th I was looking and decided to just do a Google search. One can not expect results from a search that returns a million and a half hits. I gave it my best shot and started through the first couple pages. As usual, nothing. Then I came across an actual hit. It was on a website called GEDBAS. Turned out it was a genealogy website that was translating the Quackenburg Church Register. OK, doesn't mean anything to you, right? More on that tomorrow.

Quackenburg is in Poland. Most of the Polish documentation was destroyed during WWI and WWII as well as the cemeteries. Burned documents. Plowed cemeteries. Headstones used for building material or just laid to waste like the Tarutino Cemetery in Bessarabia, Ukraine. I have several relatives buried there that I've been able to verify and I'm sure many that I can't, although it is being restored by an acquaintance from Canada.

A treasure trove of information. I've been in touch with the owner of the site and have thanked him many times for the hard work he's doing.

Unfortunately the ghosts that are my Great-Grandfather and Great-Grandmother still evade me. I have hopes that maybe they will turn up as Kai continues to translate the documents.

Stay tuned.
Posted by Mark Kautz at 8:12 AM No comments:

Email ThisBlogThis!Share to TwitterShare to FacebookShare to Pinterest
Labels: Genealogy

Didn't have any expectations and it's a good thing because we got SKUNKED. It wasn't just us, it was everybody out there.

I would suspect they planted sometime around the 13th or 14th (Presidents Holiday weekend) and the fish had a full week to disperse into the lake.

That's OK though. Gave Yuki and I a chance to catch up since we hadn't fished together since OCTOBER. Holy Cat Chow Batman. Well, we're caught up now.

In some of the previous posts I've mentioned the old arthritis problem. Having visited the Orthopedic Surgeon in December, he wants to replace the hip this year. Going to have to wait until at least September after camping season. Reservations are already made for next month at Camanche South Shore at the Trout Pond (full hookups) to do a trial run in the new trailer. Make sure everything works and we have everything we need before heading out.

June will find us at Sequoia and Kings Canyon National Parks.

July will find us at Hope Valley (as usual) fishing, camping, and kayaking.

The end of August is our yearly trip to Upper Lake for four nights with the kids in the space next to us just like last year. Fishing, swimming, kayaking, and watching spectacular sunsets. In 2021 we have two trips planned to Upper Lake (already booked). One in June and one at the end of August.

Then we can think about hip replacement.

All that said, the picture below is the main reason I have so much trouble walking along the shore. Even if I didn't have the hip problem it is still difficult (as most who fish there know) to walk on the rocks. Some big, some small, but all loose. 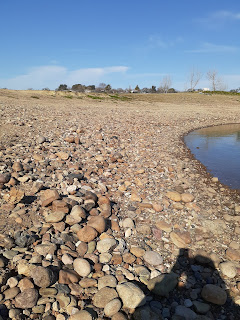 That's all I have this time.

Stay tuned
Posted by Mark Kautz at 8:53 AM 3 comments: 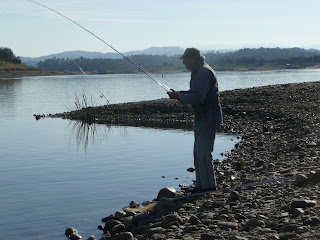 Ever have one of those songs that keep bouncing around in your head? It's called an ear worm.

There is a song by a group called Paper Lace called "The Night Chicago Died". Been bouncing around in my head for about 6 days now.

A lot of interesting information in this song. Let me take you through some of the lyrics and explain who and what.

First two sentences. "Daddy was a cop on the East Side of Chicago". I didn't know Lake Michigan had cops. Actually there is no "East Side" of Chicago. North, South, and West yes, East Side nope.

"When the Town of Chicago Died, they talk about it still". More on this later.

"When a man named Al Capone tried to make that town his own". Yup he sure did.

"And the sound of the battle rang through the streets of the old East Side". Nope, no streets in Lake Michigan.

When confronted, Paper Lace just said, doesn't every city have an East Side? They had never been to Chicago. They were a band from England.

So what was "The Night Chicago Died"?

Some think it was the St. Valentine's day massacre 2/14/1929.  It was between Al Capone's Southside gang and George "Bugs" Moran's Northside gang.

Nobody knows for sure who the killers were, but suspect a gang working for Al Capone and members of the Chicago Police Force seeking revenge for the killing of a police officer's son.

It's believed that a guy named "Three Fingers" William Jack White was the organizer of the St. Valentine's day Massacre based on the letter from investigator Frank Farrell to FBI Director Edgar J Hoover in 1935, but was later generally discarded, mainly on the grounds that there is strong evidence that White had still been in jail at the time of the massacre. A lot of events have been orchestrated by people in jail. Every year near Valentine's day, this happening seems to surface.

My dad was in his early 20's during this time and as a resident of Kenosha, Wisconsin spent time in Chicago. One of the guys he was acquainted with was Three Finger Jack White. Not many people can say that their dad was a friend of one of Al Capone's mobsters.

So that's the story of "The Night Chicago Died". If you want to listed to the song, here's the link to the YouTube video. If it doesn't connect with just a click, just copy and paste.