On the last post comments, Bill Trussell asked if I would show the rig I use at the lake. It's been successful in most all lakes I've fished and could even work in the ocean. So here goes.

I have a picture of the slip sinker rig I use somewhere on my computer. Unfortunately I have about 10,000 pictures, most separated by lake or camping place or what ever, but that one, and I know it's here someplace, does not want to be found today.

So let me describe it.

All my rods have 4# rest line on them. I particularly like Trilene XT in the blue color. I don't fish with a "bite bobber" like many do. I watch the line and it seems that the blue is easier to see off the end of the rod.

That said, I slip a egg sinker on the line and tie off a #7 brass swivel. You can use 1/4 oz., 3/8 oz., 1/2 oz., depending on the wind conditions and up to 6 pounds if you're fishing in a hurricane although I don't recommend this type of fishing.

From the other end of the swivel I add leader depending on the depth you're fishing and how far you want your bait off the bottom. I use a leader anywhere from 12" to 36". On the end of the leader I use a #18 treble hook. With this small hook, I have little if any trouble keeping Power Bait on.

If you're fishing Power Eggs, I use the same rig, just change the #18 treble for a #6 bait hook. On a #6 bait hook you can use 1, 2, or 3 eggs or a combination of eggs and mice tails. Sometimes I'll put on a mice tail and follow it with a couple different colored eggs or the same color eggs as the mice tail. It's just a matter of what the trout want that particular day. 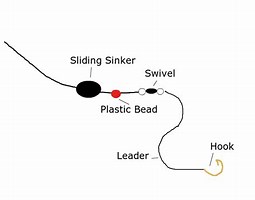 I copied this off the internet. If you use a #7 swivel, you don't need the plastic bead.

Lastly (is that a word?) my secret is using 4# Fluorocarbon line for the leader. The thing is, the fish can't see it and if you cover the small treble hook completely all they see is the ball of Power Bait. You only need a ball the size of a pea. More is not better.

A week or so ago they opened Lake Camanche. Word I had from Yuki (He's on top of these things) is that North Shore was open to Amador County Residents and South Shore to Calaveras County Residents. OK, works for me.

So last Monday (5/11) I hopped into my truck with the intention of finding a spot to try our maiden voyage in the new (and never used yet) camping trailer. Got all the way out there and as I crossed Camanche Parkway North, the main road into North Shore, there was a big sign that said "NO CAMPING". Well poop. Once again camping hopes smashed into smithereens.

I stopped at check-in and chatted with the guy there and found out day use and fishing was open as long as you followed the "social distancing" rules. I can do that.

Yesterday I drove out, paid my fishing fee, (he never checked my ID) and drove out to the peninsula where I usually fish. The closer I got the more I realized there wouldn't be any problem with "social distancing". There wasn't anyone out there at all.

I set two rods out with rainbow Power Bait and proceeded to read a book. I wasn't expecting any bites anyway.
Cloudy, overcast, and about 55 degrees. Perfect for hanging out at the lake.

I usually use two towels when fishing. One wet and one dry. When I dunked the one in the lake to get it wet, I noticed the lake was quite warm. It's been in the 80's and close to 90 for the last couple weeks. This told me two things. One, the fish are deep and two, deep is way out. So instead of fishing one rod close and one out a ways, I put both out as far as I could with a 1/2 oz. sinker.

I can get pretty close to 200 feet off shore with a good cast.

Right at 10:30 the rod on the left dipped as in "bite". I had my nose in the book and almost missed it. I picked up the rod and waited to see if it continued to bite. When nothing else happened I slowly reeled in and one of two things happened. Either he got the Power Bait or a fish just bumped the line like has happened so many times out there. Either way there wasn't any fish on the line.

Just me. "Social Distancing" to the max.

Based on how warm the water was at the shore, I think we're done trout fishing downcounty for this year.

Maybe next week I'll give Cat Creek another try

Essentially we've been stuck in the house (except grocery shopping) since mid-April just like most of you have.

Today I made a break for it.

I know this will be hard for you guys to understand, but I didn't take a fishing rod with me. I was headed upcountry to see what the chances of accessing lakes and streams was. More just to get out of the house.

I detoured over by Java Drive for a cup of coffee to start the day. I wasn't sure anything was open up the hill. As it turned out, both Cooks Station and Hams Station were closed.

My first target was Bear River Reservoir. I know that the resort itself is closed, but wanted to see what the access to the lake was. When I got to the gate and it was locked I knew I wouldn't be able to get to the lake. I've gone from the gate to the lake in the past and damned near killed myself. I know I couldn't do it now. Scratch off Bear River for now.

So then I decided I'd take a drive down to Cat Creek for a couple reasons that I'll explain as I go. The first thing I noticed was a good amount of snow was still on the ground.

This section of the road is about 6000 ft in elevation. I only had one place where I had to drive over the snow to continue the rest were just snow on the side.

About half way down the road I ran into loggers. A couple big machines, a couple pickup trucks, and a pile of logs ready for loading was enough to jam up the road for a short period of time, but they were kind enough to let this Geezer by. Sure made a mess of the road for a couple miles though.

Finally, bypassing Middle Fork Cosumnes Campground and the creek I usually fish, I continued on to Cat Creek itself. When I got there, I was sorry I didn't bring my 3wt fly rod. Wouldn't you be sorry?

I swallowed my pride and headed back to the campground.

The Cosumnes, on the other hand was not something to fish quite yet. It was running a little fast. To expound on not bringing my fishing rod was so I wasn't tempted (and I tempt easy) to hike upstream on the creek should it have been fishable. You can see from the photo below that the pool below the bridge was not fishable. The pool below that pool might have been OK, but not terrain I felt I couldn't negotiate. Maybe in a couple weeks.

On the way out I ran into a young couple I'd been playing dodge car with up and down the road. I'd pass them, then I would pull over and they would pass me etc. They said there was a tree (dropped by the loggers) across the road and they couldn't get out. They wanted to know if there was another way out. The only way I knew was back to North-South Road (about 10 miles) and then out via PIPI Valley (another 10 miles or so), but apparently they tried that and said it was blocked by downed trees too. Downed trees are a fact of life in the mountains in Spring, but a boon for people looking for wood for their fireplace. I've done that for years until I got a gas fireplace.

I told them "Come on, they won't block the road for long. We can sit and wait it out". As we got to the loggers, they were just pulling the last pickup off the road and it was clear sailing. I motioned them to stop and said "Ya just got to know the right people" and said bye to them and off they went.

I drove into the campground which was open even though Google Maps says it's closed, to see if we could put our "New and never used yet" trailer in there. Get out of the house, try out the new trailer, you know, but there isn't a space big enough to fit a 26 foot trailer. Looked like maybe 20 max and that would be a tight fit. So we'll scratch that one off our list.

On the way out I stopped for a picture of the Dogwood in bloom. They say that it always snows one more time after the Dogwoods are in bloom. Maybe not this year.

I had to stop ar Munnerlyn's Ice Cream for a pint of Lemon Custard for the wife, a pint of Raspberry Truffle and a single scoop on a sugar cone for me. Definitely a "necessary" business.

I was out, I'm back "sheltering in place", and I might just have to go back up there with my fly rod in a week or so.