What A Crappy Trip

Our yearly trip to Upper Lake starting on Sunday 8/30. As you know, it's Summer and California is on fire. We don't have small fires in California, we have big ones.

When the fires started a couple weeks ago, I heard a comment from the Whitehouse that the fires were caused by the Democrats. They were actually started by dry lightning, but then what does the Whitehouse know.

So we headed north to the lake with the idea that the LNU Complex fire was being contained and the air quality should be OK. Evening should bring some breeze off the ocean which is only 60 miles away. Boy were we wrong.

At check-in the girl in the office said that a couple days before you couldn't even see across the lake. That's about the length of a football field. From there it could only get better, right? I mean, we were already there.

The kids arrived about a half hour after we did and like last year had the spot next to us. 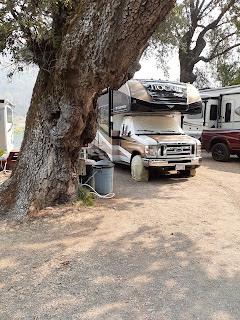 On Monday morning I was determined to fish so I launched my kayak and with my little 3wt fly rod headed out to try a couple flies that Alan at "Small Stream Reflections" sent me. This was about 11:00 am and did I mention the wind was blowing pretty good? No, well it was almost impossible to get a fly down deep enough to attract a fish even with a healthy split shot before the wind pushed me to the shore. Then I would paddle back out and try again. No I don't have an anchor.
So I came back in and set up a couple lines with Rainbow PB and hoped for the best.
By then it was almost the end of the day so we broke out the home made salsa and had chips and salsa for dinner. Seems it's becoming a standard, first day at Upper Lake, dinner. That was salsa from our garden.
Now came the problem. There were two fires burning at the time we were up there. Not near us mind you, but when they are huge California fires it doesn't matter how close you are. When the wind blew from the South, we got smoke from the above mentioned LNU Complex Fire. When it blew from the North we got smoke from the August Complex Fire. Damned if you do, Damned if you don't.
In the two pictures below it doesn't look very smokey, but it's not the smoke that's the problem. It's the particulate matter in that smoke that is the problem. When you can see ash falling on your truck, something's wrong.
California has something called "Air Quality Index". Measures the particulate matter in the air. It ranges from 0 to 50 which is good to 301 to 500 which is hazardous.
Tuesday morning the air quality was almost 400. We packed up and left. No point in staying, couldn't hardly breath. Reminded me of days in Los Angeles where your lungs hurt just by breathing.
Needless to say the week was a bust. No fish, only one kayak trip and it was short. I did get to try my new kayak system so I could gracefully get in and out of my kayak. Worked like a dream.
The kids stayed until Thursday, but they had video games to play and stayed in the air conditioning.
When we got home the air quality was 128 which is "Unhealthy for Sensitive Groups" and Geezers.
That's all folks.
Posted by Mark Kautz at 12:10 PM