Is Our History Being Erased? An Update.

The names "Old Dry Diggins" and "Old Hangtown" are now preserved officially into the city's history after the vote, which comes two weeks after councilmembers voted to remove a noose from the city's logo.

The public comment session to remove the noose lasted over three hours. However, that vote was also unanimous.

"This meeting has been a long time coming," Mayor Dennis Thomas said in the April 13 meeting. "It's my desire and our council's desire that everybody has a chance to get heard."

The decision to remove the noose from the logo was met with protesters days afterward, where some residents saw the decision as an attack on the city's history. About a hundred people met in downtown Placerville to voice their opinions.

Posted by Mark Kautz at 8:59 AM No comments:

A Good Place To Eat

Before reading too far, this is more for locals.

Katherine and I went to Sacramento yesterday in search of a recliner for the living room.  As is usually the case when we make a trip to Sacramento, it crosses lunch time.

We stopped at a little place called Urban Grill & Salad at 3040 Sunrise Bl. in Rancho Cordova. Before I get into what's to eat, I'll say that they have had 56 reviews and all 56 were 5 out of 5.

The minute you walk in the door, you're greeted in a very friendly manner.

Katherine ordered the same salad she had the last time she was there during the tire episode, but that's another story. I ordered chicken and rice plate with a small salad. After ordering, we were offered a taste of two of their "Home made" drinks. I tried a mango tea, Katherine had a raspberry drink of sort. Sorry I missed the name.

While we were eating, I tried to figure out the ethnicity of the food. There was falafel, there was a fried Eggplant platter, there was pita sandwiches. So I asked. The food is a mixture of Greek, Persian, Lebanese, and Mediterranean cuisine.

I added my 5 out of 5 review. If you don't eat here, that's your choice. Leaves more for me.

Camping the weekend of the 29th.

Is Our History Being Erased?

This is solely my opinion.

Recently there has been a reaction to the young men of color that are dying at the hands of the police. This has prompted groups like Black Lives Matter and don't get me wrong, they do matter. What is also happening is statues of Civil War participants (I won't use the word H...) have been removed. Some torn down, some just put in storage.

I understand that people of color don't want to be reminded of a period in history that should not have occurred, but it did. We should not forget this part of history anymore than we should forget the Holocaust, or so many of the wars that have happened in the past or the current one in Afghanistan.

I don't know if history is even being taught in schools these days. All my children and grand children are grown, so I don't have any connection with school now days. If history is being taught, what are they teaching them?

On top of all that, we've had a President for the last four years that, in my opinion, is a racist among other things. He encourages white supremist groups, well you saw what happened on January 6th.

Now I come to the straw that broke the camel's back.

I've lived in California for 58 years. I've studied California history in college. I've lived in the Motherlode Country for more than 40 years. I've gold mined with a pan, a sluice box, and a suction dredge. I've even written a book (not published) about gold mining.

One of the main towns in the Motherlode is Placerville. Placerville has been around since the mid 1800's. It's been known as "Dry Diggins", "Old Dry Diggins"' and "Hangtown". It's the county seat for El Dorado County. 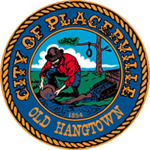 Above is the seal for Placerville formally known as Old Hangtown. Notice the noose hanging from the tree. In downtown there is a bar called Hangman's tree. California Historical Landmark #141. 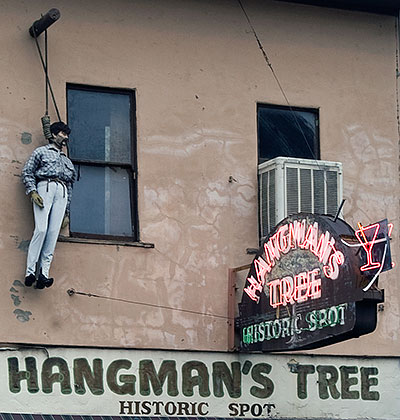 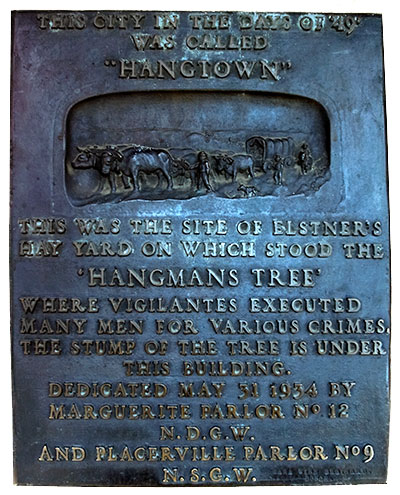 Hangtown, Hangman's Tree, all part of Placerville's history. Now the city council has decided that the noose on the county seal should be removed. What about the name "Old Hangtown"?
If the city council is going to remove the noose, why not the gold miner. Gold miners devastated the creeks and rivers in the motherlode all in the name of GOLD. Not being as environmentally aware as I am today, I'm just as guilty as they were.
Is our history being erased? Seems like it to me. As Beau of the fifth column would say, "It's just a thought".
You might stop in a listen to Beau. I find him quite intelligent.
https://www.youtube.com/channel/UC0YvoAYGgdOfySQSLcxtu1w
Thanks for listening.
Stay tuned.
Posted by Mark Kautz at 10:33 AM 1 comment:

Taking a short rest from my list of chores today, I chose a jigsaw puzzle to do. As I cruised through the 500,000 or so pictures, I came across the one below.

What I didn't notice was the sponsor on the car and the logo on the tail fin.

While I was assembling the puzzle, two pieces had writing on them so I naturally put them together.

The name that those two pieces made was very familiar to me. DA Lubricant.

A company based in Indianapolis, Indiana. The name on the puzzle didn't even jog my brain. "Vintage Indy Roadster. 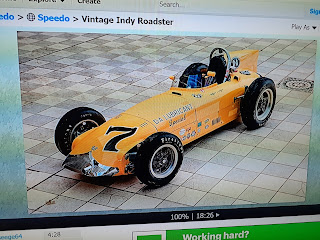 So, what's so spooky, you ask? I worked for DA Lubricant for 10 years. I was their Distribution Center Manager for the location here in Sacramento.
Suddenly, putting together probably puzzle 60 something, I stumble across a puzzle with a name that was a significant part of my life.
Can we have a little spooky music please. Thank you.
Anyway, that's it for today.
Stay tuned.
Posted by Mark Kautz at 1:40 PM 1 comment:

Can't get more Patriotic than this. 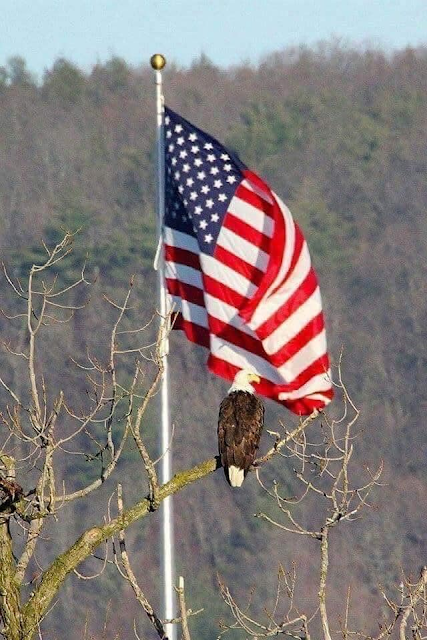 A Little Bit If Genealogy And Some Fishing

I haven't been going anywhere recently, unless you consider Lowe's as going somewhere.

Our next trip, now that we have the "no more leaking' trailer back, is the end of this month. I believe there will be fishing involved and camping too.

We're not going far. Rancho Seco Lake just to get out of the house.

I've been spending some spare time on YouTube looking at things like historical pictures, Daily Humor (God knows we need some), a site called Stern Du Tube, and a few others.

One site I came across was eye opening for this genealogist. It's called Ancestral Findings. It's more a podcast than a YouTube channel.

For the years I've been searching for my families beginnings, and I think I've mentioned this in the past, is that I can't find anything about our family prior to the year 1300. I've traced the family back via a quite well known genealogist so I'm sure the data is correct.

So I come across this podcast titled "German Surnames" and their origin. Before I go on, if you're into genealogy, there are podcasts for other surnames too. I also came across one titled "Polish Surnames". Two things stand out in my memory. One my Aunt Hilda would never admit she came from Prussia (Poland) and as a kid, I had no problems telling Polak jokes. Little did I know that I would chase my heritage back to Poland.

In those two podcasts, it was explained that prior to 1100, 1200, or 1300 surnames didn't exist because people lived in one village all their lives and everybody knew everybody by their first and only name. Then people began migrating to the next village or another village and needed some way to distinguish themselves. Most did this by adding a "occupation" to their name and this surnames began.

Johann was a miller so Johann became Johann Mueller (German version of Miller). Mueller is the most common surname in Germany and used by about 700,000 people. The second most popular surname is Schmidt the equivalent of Smith in English. Gold smith, silver smith, blacksmith, etc.

Which brings me back to the beginning of the Kautz Family around 1300. From there I know that these two original family members had 3 children. One, the name is unknown, born about 1325. the second is Albert Kautz born about 1328, and the third was Conrad Kautz born about 1330. By the way, Albert's occupation was listed a warrior.

Just to end up this post with a little fishing info. There has been some mighty big fish caught in the last 6 months at a couple local lakes. Lake Camanche recorded a 16.62 pound Cutbow earlier this year. Lake Amador recorded a 20.12 pound Cutbow in November last year and a Rainbow at 19.30 pounds also in November. But as we inch toward opening of trout season (last Saturday in April) the downcountry fishing will give way to those streams upcountry and their native trout.

Going to be a dry year. Snow pack (that fills our reservoirs during the Summer) is only about 49% of average. I don't suspect we'll see any more snow this year.