We didn't want to venture far from home on our "first" trip of the year. I put that in quotations because we had planned a trip to Death Valley via Phoenix, Arizona in March only to find two of the vents in the trailer leaking after an overnight rain storm.

So we decided to just drive over to Rancho Seco RV park and spend the weekend. It's just a short 40 minute trip. In case you didn't know, Rancho Seco was a Nuclear Power Plant owned by SMUD. The plant operated from April 1975 to June 1987 when it was shut down by popular vote. During that time it was generally on again/off again and never did operate on a regular basis. 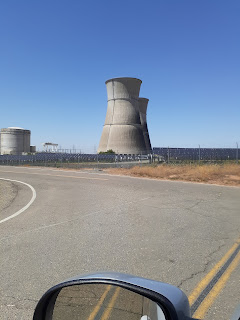 Rancho Seco Lake was established to provide a emergency backup supply of water for the station. It's important to note that should there have been a need, the lake (160 acres) could be drained into the station in 24 minutes. Fortunately it was never needed.

So, they made Rancho Seco Recreation area and stocked the lake with Bass, Crappie, Sunfish, and in the winter, trout.

I've fished this lake on many occasions in the past years, but haven't been there for about 3 or 4 years. Now it maintained by Rocky Mountain Recreation Company and has tent camping, RV camping (with water & Electric) and plenty of places to fish and a couple to swim and, of course, more expensive.

CONTRARY TO PUBLIC BELIEF, THE WATER DOES NOT GLOW IN THE DARK.

We got there on Thursday afternoon and set up the trailer. Sitting outside enjoying the quiet in between the park gocarts going back and forth, I noticed a plume of smoke in the distance. It was a wildfire in Calaveras County close to where Yuki lives and caused by........you guessed it, a burn pile that got out of control. 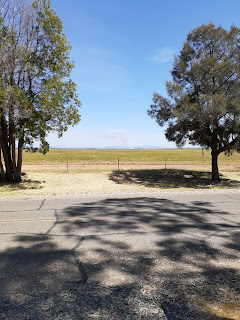 You can see from the picture below it was a pretty nice spot. 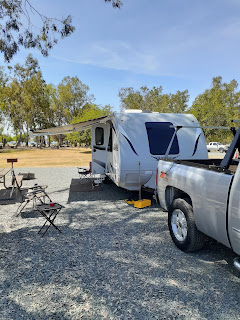 Then I added a little sunset picture. Not as awesome as some we get, but not bad. 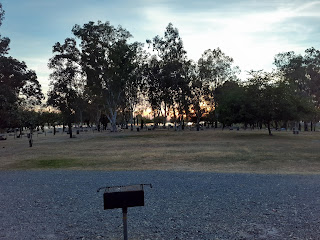 Friday we just hung around the camp. We did take a drive to check out a fishing spot or two. Since they had a nice store just down from where we were, I didn't stop for worms on the way. And you know what? The store was closed. I was wormless on a lake with a multitude of fish that eat worms.

Saturday morning we went over to the other side of the lake to a place where I found a little dock I could sit on and attempt to catch something. As usual, there was already someone on the dock so I moved over a bit and set up. 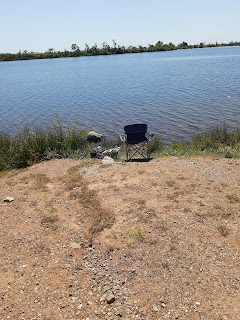 The following six pictures are just a vista of the lake. 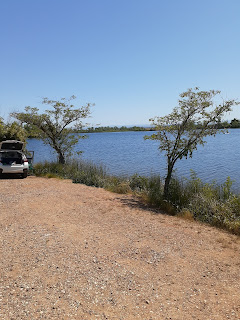 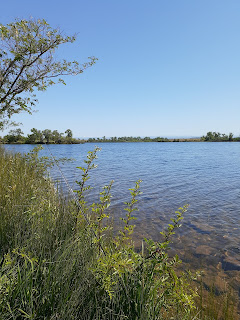 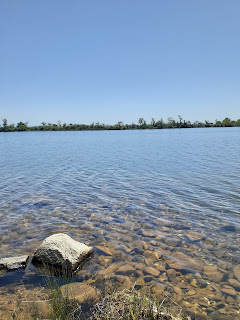 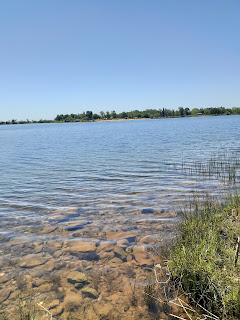 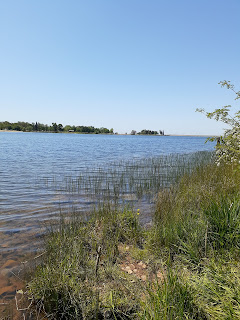 I started with a slip sinker rig with a couple white Power Eggs and a red/brown Mice Tail. It was as close to a "worm" as I had in my tackle box. On my other rod I tried a murid of lures. Everything from Kastmasters and Panther Martins to anything that was there including something yellow that I have no idea what it was.

Needless to say, I didn't catch anything, but I did get a little sun. Actually I got quite a bit of sun, but not fried.

Sunday morning we packed up and headed home.

I didn't mention that on Friday night, the place filled up with weekenders, their kids and their dogs. Next time we go during the week. It's a lot quieter. Quiet is good when you're old.

That's it for now. Stay tuned.