When I was young, bullet proof, and indestructible I did things that I now realize were just plain stupid.

When I graduated from high school in 1964 I went to work at a carpet manufacturing company. For 10 years I didn't think a thing about sliding a 1500 pound roll of carpet around or picking up a 50 pound carpet remnant. I was bullet proof, and indestructible.

A few years later I went to work for a stereo speaker manufacturer. Didn't think a thing about lifting 60 to 120 pound speakers while loading trucks. I was bullet proof, and indestructible.

After that, I went to work for an oil company. I didn't think a thing about moving 500 pound drums of oil or 50 pound cases of oil. I was bullet proof, and indestructible.

I started fishing again around 2008. I'd go almost daily. Walking creeks, up and down lakes. Float tubing. Fishing, fishing, fishing.

Enter July 2012. Living in Volcano and heating with a wood stove, I had a logging company come in and drop 7 trees. 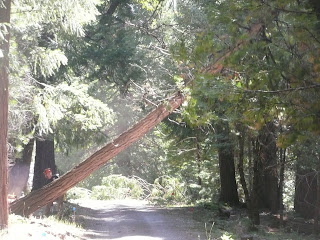 Seven trees, approximately 50/60 feet tall, cut into 18" rounds and stacked up for splitting. Stacked by hand. Some of them 24" in diameter. Really heavy. But that's OK, I was bullet proof, and indestructible.
Over the 11 years we lived up there, I noticed I was moving a bit slower each year. Aches and pains increased, but slow down? Never. I was bullet proof, and indestructible.
Now it's 2015 and we're moving to downtown Jackson. Living in the wilds and all that it entails, was getting too much for this 69 year old Geezer. You attain Geezer status at 65. As it turned out, we had to store our furniture in the garage while the floor guys put in the new flooring. New flooring in, moved most of the furniture into the house (with some help from my son). Suddenly I found out, I'm not so bullet proof, and indestructible. After that little episode I was hurting, but that was OK. Couple of Tylenol and I was ready to go. After all, I was almost bullet proof, and indestructible.
Then the storms came and part of the 16 year old fence around the yard fell. Replaced 2 - 8ft sections. Piece of cake.
Next year, another storm and two more sections of fence and the gate. Replaced that. Piece of cake. Then I started looking at the whole fence. 4 brand new sections, 21 ugly, old sections and how long until they fell? So it began.
Have I mentioned thru this post that I never wore a back belt? Stupid.
Every section of those 21 required one or more of the following: A wheelbarrow of fence boards whether rails or boards. In some cases, 3 - 60 pound bags of fence post concrete. From the garage, across the front of the house, up the hill behind the house to the section being replaced. After each and every wheelbarrow full, the back hurt a little more until it was almost unbearable by the last section.
I've listened to country music for many years now. Here is a little quip from Toby Keith:
I ain’t as good as I once was and that is the cold hard truth. But there was a time, back in my prime when I could really hold my own.
I hope you can see where I'm going with this. Here is the result of the previous 50 years.
1. Peripheral neuropathy. It can result from traumatic injuries, infections, metabolic problems, inherited causes and exposure to toxins. In my case, exposure to Acetone for the 10 years I worked at the oil company. People with peripheral neuropathy generally describe the pain as stabbing, burning or tingling. Yes, all the above.
2. Osteoarthritis. According to X-rays, in my back at the L3 & L4 vertebrae.
3. Osteoarthritis. In my left hip.
4. Osteoarthritis. In both my knees.
2, 3, & 4 are caused by over use of the body during younger years.
Now I look like this, but I do have teeth:

Can't fish the streams or the lakes by myself. Can't be alone if I would fall. Can't go up and down the hills and the uneven landscape by streams. It is not walkable even with my cane. Can't float tube because the hip won't allow it.
BUT, I can kayak although getting in and out gracefully is a challenge. So, being the creative sort that I am, I made a rack (if you will) out of 2' PVC pipe with an anchor driven into the ground so that I can paddle up to it, swing my legs around, grab ahold and stand up. Voila, gracefully exiting of my kayak.
We're heading up to Upper Lake mid next month, I'll have pictures.
The moral of this post is don't think you're bullet proof, and indestructible when you're young because it will come back and bite you in the ass when you get old.
To end this post, a little quip from Garth Brooks (saw him in concert back in the 90's and was probably the best concert I've ever been to.):
"I’m much too young to feel this damn old."
Stay tuned.
Posted by Mark Kautz at 11:24 AM