The other day my wife and I were talking about our water usage. During a normal Winter we use about 3000 gallons every month. When you consider baths, dishes, and laundry on a monthly basis, it's really not that much.

Since Summer started (and it's not really Summer until 6/20) we've steadily increased watering outside.

As you probably know, we are expecting another drought year. Happens every time we get an El Nino event in the Ecuadorian current. There is two parts to this, one is El Nino. We get a drought on the West Coast and the East Coast gets drowned. The other side is La Nina. In this case we get more water that we really want, but it also puts a huge snow pack in the mountains, that in Spring melts and fills our reservoirs. It also gives the East Coast a drought. So depending on where you're situated in the country, they are either good or bad.

In 1976 We had a drought (the first I was aware of) and everybody saved water. Our thanks for doing this was the water company didn't sell enough water and had to raise the rates.

Enter 2015. Another drought year. We had just moved down to town and purchased a house with a big lawn. Again, everybody but us saved water and sure enough, the water company didn't sell enough water and raised the rates. I told the neighborhood that was what was going to happen and it sure enough did. So now we have houses with rocks instead of lawn. The only hold outs were us, and two other neighbors that have postage stamp size pieces of lawn.

Now we're in 2021. Last Winter the snowfall was so bad that at the peak of Winter we only had 1/2 of the normal snow we needed for the year and it never got better. At the last snow survey the snow was non-existent. They do the survey 3 or 4 times a year, in the very same place (they actually measure from a certain spot to where they sink the pole that measures the amount of snow and the water content) every time.

Which brings us to us. We have slowly increased the amount of watering days as it has gotten warmer. We started with 3 days a week, then 4, now 5 just to keep the grass alive.

This is the front yard. That's a lot of grass and a lot of water. 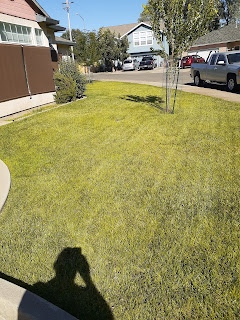 We've been averaging (when you look at the water bill) about 4 units of water a month. That's the 3000 gallons mentioned above. In March it started getting warmer and our bill was 15 units. OK, an increase of about 30 bucks a month, no biggie. Last week we got the bill for April. Went from 15 to 23 units. And additional 25 bucks. Again no biggie. We're watering 5 times a week. Keep the grass green.

We decided, yesterday, the lawn had to go. It will be a several year process, but the first part will occur in the next couple moths.