If you recall the post from April 13th, I showed a picture of an old Indianapolis race car with DA Lubricant on it and mentioned that I worked for them for 10 years. Before that jigsaw puzzle I also knew of a movie where there was a drum of DA Lubricant oil in the movie. The movie was "White Lightening" with Bert Reynolds and Jerry Reed. The picture below is from that movie and you can see the drum with the D-A logo on it. 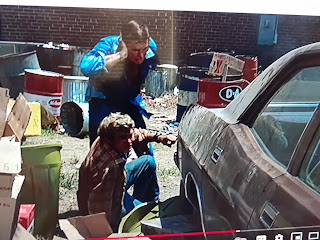 On to Hope Valley. Last year it rained most of the time we were up there. This year, different story. The first picture is from our spot up to the area for tents only camping. Notice the blue skies. 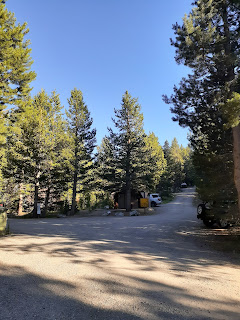 Here we are, same space as last year. Temperature in the 80's during the day and cold at night. Trailer was 54 degrees this morning, inside. 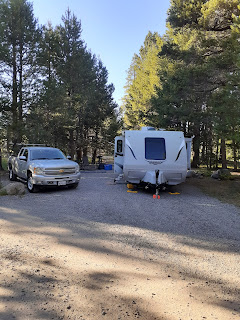 Now, one would wonder if I went fishing. Well, I did, sort of. Across from the camp ground is the West Fork of the Carson River. You've heard of it before. I've fished it before and caught small Rainbows and small Cutthroats. This year, and I might remind you that the West Coast is in the worst drought in 1200 years, I went over and the water level was so bad, I didn't even try. On the other hand, there were a bunch of kids swimming in the water so it was my guess that the temp (I didn't have my thermometer) was way above 70 degrees. Don't want to fish in water that warm. This was Thursday morning.
Back at the trailer, one of the other campers walked by and saw me fiddling with one of my rods and said they were up at Blue Lakes up the road and it was so windy they couldn't even fish. I decided to wait and see if Friday was any better.
Thursday being our anniversary, we decided to cook some steaks and baked potatoes on the BBQ and a bunch of Zucchini on the out side stove. That's the stove below. 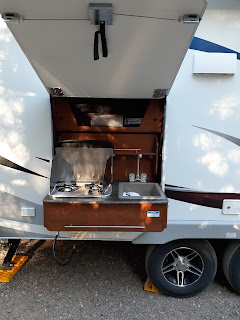 There is a story behind this stove. When we first got the trailer I tried to use it. It connects from a propane line to the stove with 1/4 inch slip couplings. The same couplings you use on an air compressor or air powered tools. You know the kind. Anyway, couldn't get it to work so I took the trailer in to the dealer and they said it worked fine. The thing I missed was a valve at the trailer and a valve at the stove. Turned on the trailer one, but missed the one on the stove.
Next time out, opened the valve on the trailer and the one on the stove, still wouldn't work. Since it had a two year warranty, I called the manufacturer, told them the problem, and they put me in touch with a dealer locally. The dealer ordered the part and I waited and waited and waited. After a month I left the dealer a message on the Wednesday before Memorial day asking what was happening. That following Saturday I left a message saying cancel, I'll fix it myself. Saturday I ordered the part from Amazon.com The part was here Sunday and installed on Monday. The dealer finally called back Tuesday and said the part arrived Friday, but he'd been gone since the previous Tuesday. Who runs a business and doesn't take their cell phone with them?
So this trip, hooked everything up, lit the stove, and had sautéed Zucchini with our steak and baked potatoes.
See below, BBQ and no rain. 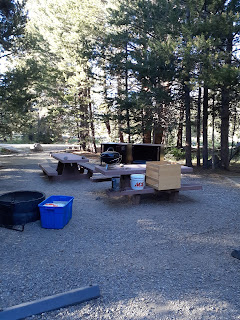 I shot this straight up from where I was sitting. Nice tall trees. 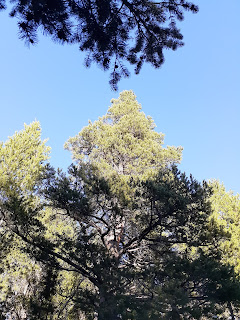 Friday morning the wind was blowing just as hard. I was also having some trouble walking, so I had to throw in the towel. No fishing this trip. I never would have made it down and up the hill beside Upper Blue Lake.
We pulled out this morning about 11 am and as soon as we hit the highway, I noticed a fire just over the hill from where we were camping. Interesting that fire in the campground fire pits was still allowed. The fire I saw was called the Tamarack Fire. Currently 6600 acres with 0% containment. It's located about 8 miles South of Markleville and evacuations are in effect for parts of Markleville, Grover Hot Springs park & Campground, and East Fork Resort and Campground. This is not very far from where we were camping. Not very much fun for campers up there. 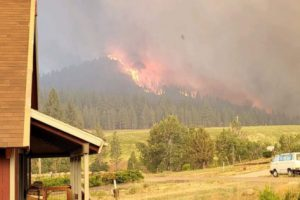 With the wind up there and this fire, I suspect it will get a whole lot bigger. Typical California Summer.
No trips planned until the end of August and then back to Upper Lake.
Until then, the grass is dying in the front yard and the drought remake is under way.
Stay tuned.
Posted by Mark Kautz at 3:19 PM