Back on June 11th I posted about the amount of water needed to maintain the front grass. Well, it's been a little more than a month and I thought I give an update on the drought redo of the front yard.

This was the photo I took on June 10th. 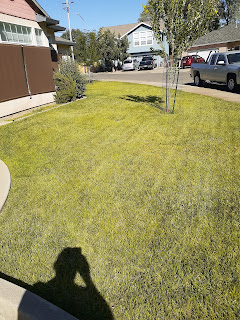 Since then I've removed some of the scalloped brick under the front window. I've also started to use the weedeater to cut the grass down to nothing. It's going a little slow as I've only been able to work outside for a couple hours a day. Too hot after that. As it is, I'm covered with sweat.
This morning I took the photo below. This is what happens when you don't water for a month and the temperature hovers around 95 to 100. I've plugged most of the sprinklers and added drip systems to the trees and shrubs that are staying. Eventually I plan to cover the grass with weed abatement cloth and then wood chips. 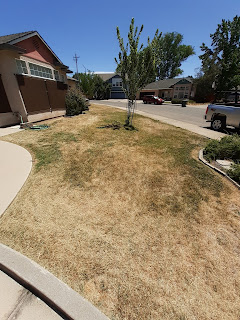 I've been looking for someone to help with the part that I'm just physically unable to do, but like you've been hearing on TV, no body wants to work.
I approached the lawn service that mowed the grass and all they want to do is a razzle dazzle front yard with dry river beds and some snazzy plants, BUT they can't do anything until September. Hell, by then it'll be raining again. I even approached the lawn guy who does the neighbors across the street. Guy doesn't answer texts or voice mails. I caught him in person 2 weeks ago and couldn't even get a commitment whether or not he could help me.
So I keep plugging away a couple hours a day. Sooner or later it'll get done.
Next camping trip, end of August. Back to Upper Lake.
Stay tuned.
Posted by Mark Kautz at 1:35 PM