Smoke detector update. Smashed, ripped apart, it still beeped. The smoke detector from Hell. Now in the trash can to be picked up and disposed of tomorrow morning.

You all have fire alarms in your houses. When we purchased our home here in town, I replaced the hard wired alarms with these snazzy new 10 year fire alarms.

A couple mornings ago we were dumped out of bed buy the beeping of a fire alarm or so we thought. Three blasts followed by three blasts and then nothing. I looked around at all (about 10) alarms in the house and all I could find was the Carbon Monoxide detector flashing that little red button. Figured that must have been the one that misfired. So I went to Lowe's and purchased a new one and plugged it in.

Two nights ago I was up doing the bathroom thing that all us old guys know about, and noticed the smoke alarm in the bedroom was flashing little light blips. I might mention that this was 12:10 am. From the couple nights before experience, I wasn't taking any chances that it was the culprit and not the CO detector.

Naturally the ceilings are high enough that a ladder was needed to get it down and all my ladders are outside long the garage side of the house. So I barefooted it out and got one. I might add at this point and remind everyone that with Peripheral Neuropathy my feet are extremely tender. The side of the house is pea gravel and stepping stones with pea gravel tops. Yes, I did use several 4 letter words until I got the ladder back into the garage.

So, here I am at 12:20, in the bedroom, on a ladder (my wife is awake by now) taking down the smoke alarm so we don't have to experience one of those "claws to the ceiling" alarms in the middle of the night.

Took the detector out to the garage and pressed the disconnect button. Left it on the work bench.

This is what a 10 year smoke detector looks like. 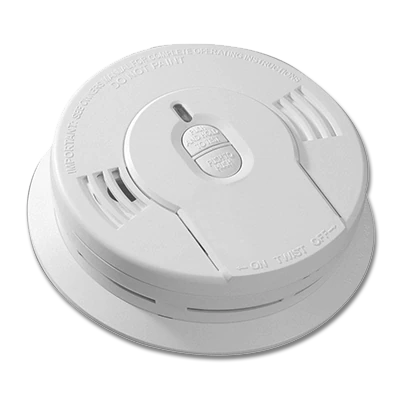 Enter this morning. During a break from destroying the front yard, I heard the somewhat quiet beep of a smoke alarm. Went to the work bench, clipped off more of the disconnect part and shoved the button as far as it would go. Punched the test button and nothing. Good, finally off.

Enter the second morning break, sitting on a camping chair (only one left since I killed two of them at Upper Lake) with a fan blowing in my face (it was about 95 degrees outside) and again I hear the little smoke detector beep.

Walk to the work bench, grab the detector, a hammer, and out to the drive way.

That sucker will NOT beep again, EVER.

Back to Lowe's for a new one. Think I'll go back to the battery ones.