My son and daughter-in-law were supposed to go with us to Upper Lake this past week. As I mentioned in the 8/26 post they were evacuated. Well, they are still and unfortunately missed the trip to Upper Lake. Apparently the appeal to go camping isn't there when you've been camping (so to speak) for the last three weeks. That said, looks like their home is going to be OK. Fire (Caldor Fire) hasn't moved toward them for some time even though it's raging Eastward. Currently 212,907 acres with 29% containment.

Being the good and kindly father I am, we went anyway. Actually it was their decision since their motorhome was crammed with everything you take when evacuating.

Sunday was the drive up. Only took us 3 1/2 hours (normally 4 1/2) because no usual traffic jam at the airport and no road work to negotiate. I think I've mentioned that California only has two seasons. Winter and road repair. So we got there, set up the trailer, got out our favorite beverage and enjoyed the rest of the afternoon. I give you a Sunday Night sunset for your viewing pleasure. They really do have great sunsets here. 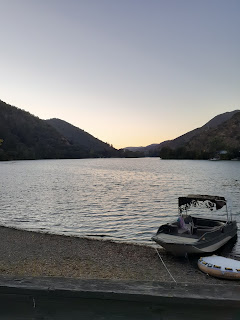 Monday morning we got out the kayaks and set up the "rack" I use to gracefully get in and out of my kayak. Unfortunately I forgot the spike that holds the "rack" so I had to ratchet strap it to a log laying there. Not quite as stable. Just have to make sure you get the straps in a straight line. 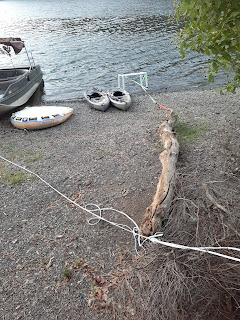 Spent part of the day paddling around the lake and just getting used to kayaking again. Last time out was June. It got pretty rough with a wind across the lake at about 15. So we just cut it short and called it a day. A Monday night sunset. See what I mean about great sunsets? Every night is like this and I should mention this was taken from the side of our trailer. 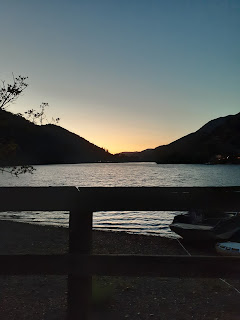 Tuesday dawned a lot calmer so off we went. this time I didn't forget the trolling attachment for the kayak. 1/4 oz. Gold Kastmaster was the lure of the day. Last June I caught one off a certain cabin so I trolled by there again. Sure enough, same spot and I hooked up again. 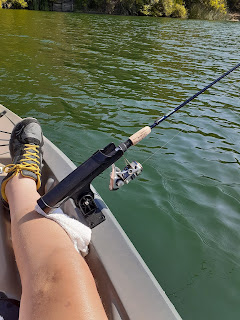 Now, the picture below isn't just for a look at my knee, it was the first picture of said fish above. I can't see it, doubt you can. 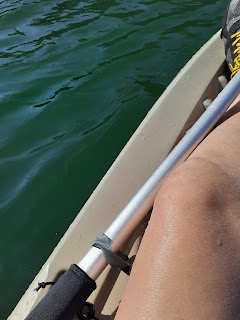 I took another. It's hard trying to get your phone out for a picture when the fish is pulling you around in several directions, but I got him this time. 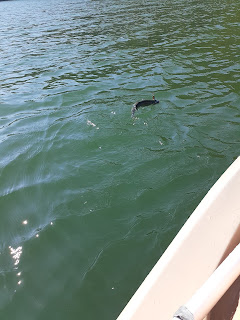 Turned out it was a nice about 12" Rainbow. Again I couldn't hold him, get the hook out, and get a picture all at the same time so you're just going to have to take my word for the size. After all, I am an honest fisherman. 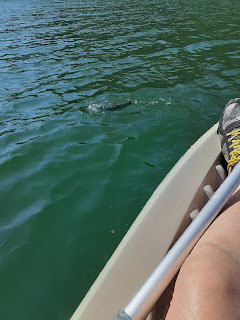 Wednesday I didn't catch any from the kayak although I did get one good bump in the same place. Later in the afternoon I soaked a little Rainbow Power Bait off the dock and took a second one, it too about 12". Gave it to the guys next to me. Told him I would back him up if he wanted to say he caught it.
Since we were going home Thursday, I also got you a Wednesday night sunset. If you remember the June magnet fishing incident. You know the dislocated and sprained fingers, I had to "get back on the horse" so to speak, so Wednesday about mid-day I hauled out the magnet fishing bucket. I got the usual nails, screws, hooks, snaps, and an occasional chunk of metal. This time the prize (last time was the top part of a fishing rod) was a "live' 410 shotgun shell. Seems magnet fishing is always an adventure. Still have about half the dock to cover. It will still be there next June when we come back. Besides my daughter-in-law is still a magnet fishing monster. That's it for this trip. In a couple weeks we are off for our final trip of the year to a new campground on the coast.