California has been talking drought all Summer. Actually we've never been out of a drought since about 2012.

Yes, we've had years where it's rained a lot, but it's not the surface water, it's the aquifer where the real drought is. If you're not familiar with aquifer's, let me give you a little tutorial.

According to Wikipedia: An aquifer is an underground layer of water-bearing permeable rock, rock fractures or unconsolidated materials. Groundwater from aquifers can be extracted using a water well. The study of water flow in aquifers and the characterization of aquifers is called hydrogeology. 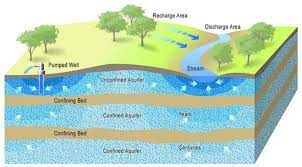 The above picture gives you some idea of how the aquifer works.
I've lived in two places where I've accessed water via a well. One well was 500 ft. deep. The other only 50 ft. The second well was already in when I bought the property. The first one I watched the well driller find where to drill by witching.
According to the Farmers Almanac: Some call it “the gift.” Others refer to it as “dowsing,” “doodlebugging,” or “water witching”—the practice of locating water underground using a forked stick.
When he witched my first well, he uses 2 "L" shaped metal rods. He walked all over the property (I had 10 acres) and when the two rods came together, that's where he drilled. The well produced enough water that I didn't need a pressure tank. I'm a believer.
So back to the rain. It rained off and on the last couple days and more expected tomorrow, but the big day is Sunday. We're expecting something called "Bomb Cyclone" because of its ferocity. It's an atmospheric river that brings torrents of rain and feet of snow and it's headed right toward Northern California. These atmospheric rivers extend thousands of miles from the tropics to the West Coast.
The measurements on a barometer are in millibars. Normal air pressure at sea level is about 1,013.25 millibars. A hurricane will drop a barometer 30 millibars. We're expecting a drop of about 24 millibars.
Don't fear my friends, we have kayaks, but we're about to get walloped. Time to batten down your hatches and get out your PFD's. The rain's is coming.
Won't get us out of the drought by a long shot, but we'll take every thing we can get.
Stay safe everyone.
Posted by Mark Kautz at 5:11 PM