Alex Continues To Be A Hero In My Eyes

The latest from Zhitomir:

Came across this YouTube channel and as Yogi Berra said, "It’s like déjà vu all over again."

Marc snorkels and videos in and around the beaches at Deerfield Beach, Florida.

What blows me away is these places are the exact places I snorkeled between the ages of 9 and 16.

At 16 my parents moved me to the Los Angeles area of California. We arrived on July 3, 1963 at what I considered the "armpit of the earth". If you look at the live cam of the beach next to the fishing pier in Deerfield, you can see the greatest place in the world for a young boy to grow up.

That said, I've only been back once in 1999. I stood out on that same fishing pier and when talking to the gentleman next to me said, "35 years ago, I was that young man" fishing on a warm Saturday morning.

So stop by Marc's channel and give him a shout.

It's like having a salt water aquarium on your computer.

A Note Included From Polish Origins & More From Alex

I know a lot of you stop by and read my posts (137 already today & 154 yesterday). Five people asked me to continue the emails from Alex and I will continue to do so. I think it's important for everyone to know what the Russian military is doing in Ukraine. One can not agree with bombing apartment houses, schools, and hospitals. My cousin Dan in Wisconsin has also been in touch with Alex so now it gets even more personal.

So here is the latest from Alex and a quick note from Polish Origins:

All Is Quiet In Zhitomir

If you want me to continue to post emails from Alex, give me a 'yes" in the comment sections. About 100 people per day are stopping by, but only 1 or 2 are leaving a comment.

If your answer is 'no", I'll continue to forward them to my son and my cousin in Wisconsin and post about other stuff.

I appreciate your answers.

A couple more emails from Alex who seems to be doing OK.

Haven't heard anything from Ukraine in a couple days. I do hope Alex is OK.

In the mean time, the yard redo is still in progress (although slowly). I've laid the left side of the walkway edging (black line) and purchased the pavers to put in. Just in case you've forgot, we're going to remove the grass and replace it with bark nuggets. But still need a walkway to the back yard. 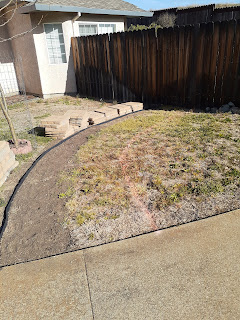 But before that can go forward, we need to "top off" the garden plots in the back yard with that wonderful garden soil preferred by the pot growers in our area. After all, Spring is coming on the 20th and its almost time for garden planting. You'll note the triangle box in the back of the picture. New this year specifically for Lemon Cucumbers if we can find them. We had one plant last year and it produced more cucumbers than we could eat. Also, last year we had them in a circular fencing and it was very hard to a: find them and b: pick them. So, as you can see I put a flat screen against the fence and it's done in such a way that it moves backward and forward to make picking easy. Later on I'll do a post on what we decide to put in the rest of the plots. 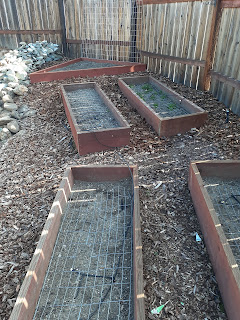 Back to the yard. Once we get the soil in the garden starting Friday, the pavers will go in. Back on January 30th, I posted the cost of replacing the yard with a sod cutter. Scratch that. Now we're going to solarize it. Wet it down, cover it with clear plastic, wait 6 to 7weeks, and voila! dead grass, dead seeds, dead everything. Scrape off the dead grass and cover with landscape fabric and bark nuggets. Simple. Quit laughing, I know you are. 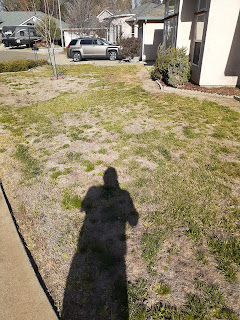 Hopefully the rest of the lawn will look something like this. 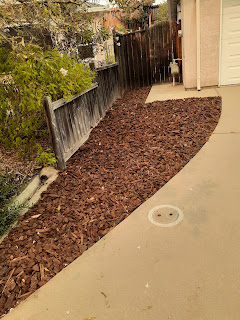 OK, that's the update for today.
Stay tuned.
Posted by Mark Kautz at 10:20 AM No comments: