We got to Upper Lake Wednesday afternoon. We were the only RV there. 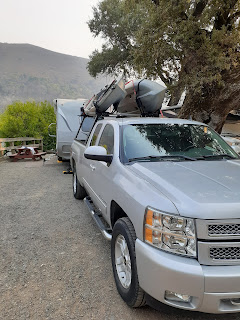 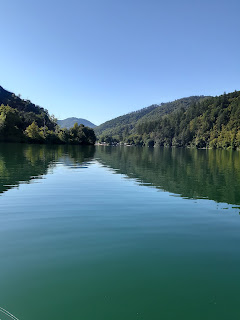 If the lake would have looked like this, I'd have been on it like hair on a gorilla. But no, it had to look like this: 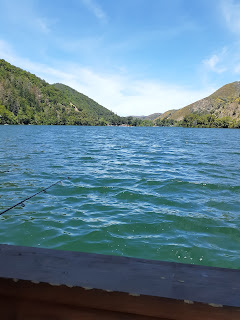 And it only got worse. In fact it stayed this way the whole time we were up there. Never took the kayaks off the truck.
I grabbed my magnet fishing gear and hit the dock. Well, not literally as I've done in the past. 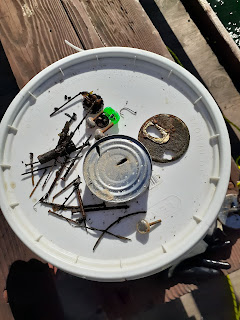 This is Wednesday's take. The can must have been a "chum" can and probably Tuna because boy did it stink. Some nails, a few bells that some fisherman use and a few beer caps.
The one thing I did notice is the lake is FULL. Check it out. 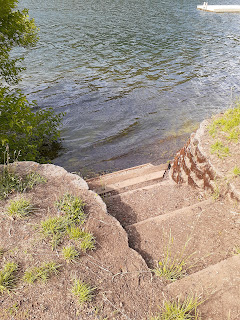 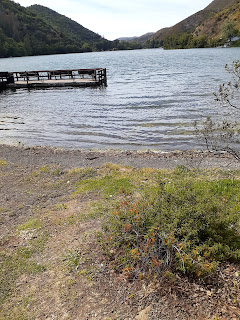 There was at least 5 feet of beach in both places when we were here last August.
Thursday morning I parked myself on the dock and put out two lines with the usual Rainbow Power Bait on a slip sinker rig. As usual from the dock, nothing. 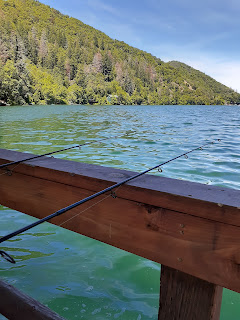 So on Thursday afternoon I set up to the right of the steps in the above picture and it wasn't long before the first hit. In trying to extract myself from the chair (when you're old it's difficult getting up), I let the line go loose and the fish headed into the weeds. Couldn't get it out. Ended up breaking the line. The weeds in that part of the lake look like ocean kelp. BUT, the second bite did make it to the shore. 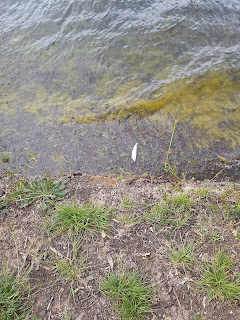 I know it looks tiny (it was about 10 inches), but I was standing about 6 feet above the water. Might also mention this is the first fish for 2022. That is so sad. June 10th and the first fish of the year. I also caught a second one right after.
Thursday I was back on the dock with my fishing magnet. The take is getting smaller. 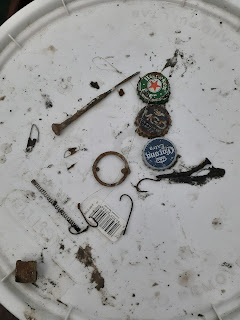 But, there is something on the left side of the dock that I latched onto, but after many minutes of tugging on it, couldn't break it loose.
Went back again Friday morning and tried some more, but it's still down there in about 20 feet of water. I talked to the owner of the resort and he said there was nothing there that he knew about so it could be an outboard motor, blade from a boat, anything. I'll be back at the end of August for further work on it.
This was dinner Thursday night: 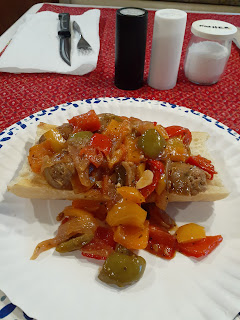 Jalapeno sausage from our local butcher shop smothered with onions (from out next door neighbor's garden) and several colors of bell peppers. Sautéed in Olive Oil and secret spices. Ladies and gentlemen, a dinner to die for.
So I'll leave you this trip with the usually awesome Upper Lake Sunset. 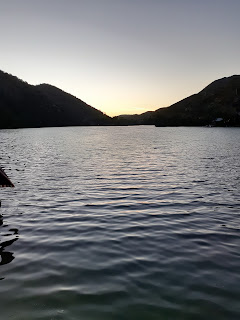 We were scheduled to stay until Sunday morning, but left on Saturday afternoon. Sunday morning bode of many RV's at the RV dump on the way out and it was supposed to rain. Both those factors make for a messy morning. Zipped right through and drove home in 100 degree heat. And yes, it did rain this morning.
Stay tuned.
Posted by Mark Kautz at 12:35 PM