The Russians Continue To Devastate Ukraine

Apartment Houses, shopping malls, and medical training facilities. These are definitely military targets, NOT. What a bunch of assholes.

Do watch the videos. Hero's one and all.

Here's the latest from Alex:

Sasha the shoemaker who lives with me woke me up and crying: “We are bombed get out of the house!” The sounds were very loud, the cars’ alert systems went on, the people from the neighboring houses were outside.

Later I found out from the Zhitomir governor's speech: “As of 4:15 am, the enemy once again launched missile strikes on Zhytomyr Oblast!

I can't comment on where, how or whether there were any casualties.”

Only today was confirmed that all these missiles were aimed at the training center outside of Zhitomir. This is where dr.Judah and I were given training to the military paramedics. So I right away imagined all these people I met there and prayed for them.

Now we know about one dead soldier and two wounded.

Almost the same time Kyiv was under attack too. The missile hit the apartment house not far from Metro Station Lukjanovska, this is one of the central districts in Kyiv, not far from the central Archives in Kyiv, where I used to work with documents. Unfortunately this attack changed the life of one family forever. The father got killed right away, the mother is in critical condition in one of Kyiv's hospitals and a seven year old girl had a couple surgeries and according to the doctors has no threats to her life.

One of the analysts says that Putin wants to drag the war till winter. When Europe will need the most natural gas to heat their homes this might be pressure points for Ukraine to negotiate on not favorable positions and sacrifice some territory.

Food and energy will be number one for Ukraine to survive this coming winter. 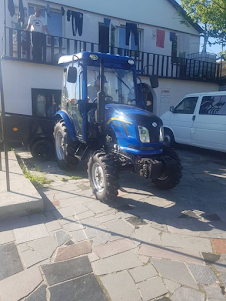 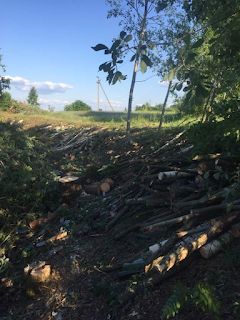 It’s God's timing to start the farming initiative project in Vigoda. Due to generous support from friends from the US and Canada I purchased last Friday a 40HP tractor, a farming mill, a plough, discs, hay cutter and a wood chipper. The head of the village allowed us to clean 25km of the mineralization channel. In our estimation this is 1600 cubic meters of wood. This is almost a one year project. We have already received a first order of 50 cubic meters of wood from the business from Zhitomir.

It’s better to end this update on a positive note.