I've been eyeing Middle Bar Bridge ever since I got my 500# Magnet. The last 5 months have been a bust because of the surgeries. Monday, after a weekend of heavy rain, I drove over to the Highway 49 bridge to check out the flow of the river that eventually runs under Middle Bar Bridge. It was moving pretty fast and I opted to pass. 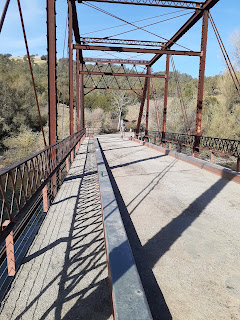 So this morning I drove over to the bridge. Ran into a couple guys fishing and mentioned that I'd like to do a little magnet fishing. They said I could go to the far end (see the picture) and fire away although there have been several magnet fishers in the area and they have gotten NOTHING.
And here I thought I had the corner on magnet fishing in Amador County. Damn those people on YouTube. Now everybody and their brothers and sisters (don't want to seem sexist) is in the game.
I then went with Plan B. I always have a Plan B. Back in the truck (actually I never got out of it) and off to Electra Road. Keep in mind as I'm driving up Electra that we had a fire this past July. I planned to go to the "swimming beach" about half way up the road. When I got there, it was gone. The parking lot, the beach, gone. They did leave the stinky vault toilet though.
I could have probably walked down to the water, but I also could have been butt deep in what looked like some really mucky dirt. I also noticed that there have been several mudslides in the burn scar. The road was a mess. Thank goodness for 4 wheel drive although I really didn't need it. Better safe than sorry.
The only other place on the river that "might" have something is right under the 49 bridge, but the water was moving so fast, I probably would never have gotten the magnet to the bottom.
Scratch Middle Bar Bridge, Electra Road, and the 49 bridge for magnet fishing.
FYI, the two guys fishing didn't catch anything either. Had I brought my gear, that would have been a bust also.
So I'm home packaging Chicken Tenders from Sam's Club with the Food Saver.
My next plan for magnet fishing is in the seedy part of the city of Stockton, California. There is a really cool area where I just might find something. I'm also taking a couple other people for safety.
Stay tuned
Posted by Mark Kautz at 11:44 AM