"Yesterday, December 7, 1941—a date which will live in infamy—the United States of America was suddenly and deliberately attacked by the naval and air forces of the Empire of Japan."

This morning while my wife and I were having our morning coffee I mentioned that I wondered how many of the younger generation know the meaning of this date.

The more and more I watch the news and see our history being removed from statues in parks and military bases being renamed etc. makes me wonder what is being taught in school as American History. I suspect I could ask my grandchildren, but they are past school age and my great-grandchildren are a few years away from school in general.

Makes me wonder if we will have a December 7, 1941 in the near future with the angst we are experiencing with Russia, China, and North Korea.

Russia seems pretty much benign since Ukraine "opened a can of woopass" on them.

China, all they want is Taiwan but the US is not keen on giving up our relationship with this INDEPENDENT country that China seem to think they own.

North Korea: They seem to think we're planning to invade them for some reason. For the most part, from what I've seen, the US is keeping an eye on them, but basically ignoring them. Seems the Supreme Leader has some sort of feather up his ass about the US. His sister is a whole nuther ball game. She seems to be nuttier than him.

OK, that said, let us not forget Pearl Harbor Day and remember those 2403 US personnel who gave their all for our freedom.

Let's also remember the hero's of that day. If you've seen the movie 'Pearl Harbor" with Ben Affleck, Josh Harnett, and Kate Beckinsale then you know that Cuba Gooding Jr. played a hero named Doris Miller who was only allowed to be a cook because he was black, but then the attack started manned a 50 cal. machine gun trying to take down Japanese planes. He got 4. For his valor he received the Navy Cross. He was on the escort carrier Liscome Bay on November 24, 1943 when it was torpedoed off Butaritari Atoll in the Gilbert Islands. He didn't survive. 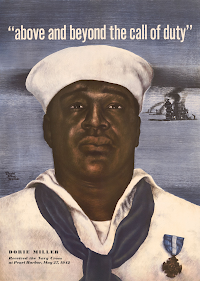 The most famous Admiral Isoroku Yamamoto Quote about the sleeping giant may not even have been said by him. “I fear all we have done is to awaken a sleeping giant and fill him with a terrible resolve.”
They certainly did and should it happen again by someone (like Osama Bin Laden did), the sleeping giant will once again rise.
Let's not forget this day.
Stay tuned
Posted by Mark Kautz at 12:19 PM